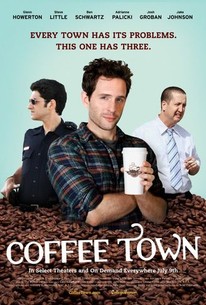 The first feature film from comedy leaders CollegeHumor, Coffee Town is an updated workplace comedy for the generation that works out of coffee shops. Will (Glenn Howerton) is a 30-something website manager who uses local café, Coffee Town, as his office. When the owners of the shop discuss plans to convert Coffee Town into a bar, Will enlists the help of his two best friends Chad and Gino (Steve Little and Ben Schwartz) to save his freeloading existence. In order to thwart the plans of Coffee Town's owners, the trio stages a robbery to create the illusion of an unsafe neighborhood not suitable for the proposed venue. Also standing in their way is Sam (Josh Groban), a disgruntled barista with delusions of grandeur-he wants to be a rock star-and Will's heartache over unrequited love for Becca (Adrianne Palicki). Written and directed by Brad Copeland. (c) Official Facebook

Glenn Howerton
as Will

What starts out as genuinely bright veers into cringe-inducing territory -- at least for someone that isn't a man, ages 18 to 24.

"Coffee Town" is kind of a disaster, just gaspingly unfunny for long stretches. You can see the comic actors flex their muscles, delivering zingers and bad-taste gags that probably looked great on paper. And . . . crickets.

Coffee Town is full of laughs from start to finish, proving CollegeHumor can be a major player in the feature film world.

Alexander Lowe
We Got This Covered
View All Critic Reviews (3)

i liked the single location the most and being a always sunny in Philadelphia fan, i found this funny and what indie filmmaking is all about

CollegeHumor decided to go one step further from Internet comedy videos to full fledged feature film, and it is a fine start from Brad Copeland and the gang. Big fan of Glenn Howerton from Always Sunny. Ben Schwartz is a comical genius and Steven Little has come to the front from East Bound & Down. Surprisingly, Josh Groban was gold and the brief, albeit hilarious cameo from Jake Johnson was classic. Adrianne Palicki was meh for me. Pretty sure, but not the best timing. The story is simple, but it's not really why you're watching the film. The bits and dialogue in between the main story really get you laughing in sets. It has more than a feel of a YouTube video but not quite as fleshed out as an indy film. If you like the actors, take a moment to sit and watch.