Cold Around the Heart1997 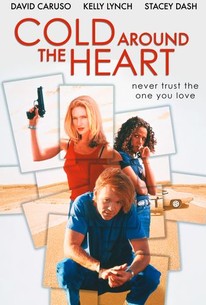 Cold Around the Heart Photos

This crime film, in the tradition of Bonnie and Clyde, is the directorial debut of writer John Ridley, scripter of Oliver Stone's U Turn. The neo-noir tale begins as Jude (Kelly Lynch) and Ned (David Caruso) attempt a getaway with $250,000 worth of stolen diamonds, leaving three dead back at the jewelry store. Ned is captured, makes an escape, and is in the process of tracking Jude when he makes the mistake of picking up hitchhiker Bec (Stacey Dash). Bec talks on about the sexual abuse she received from her alcoholic father and then pulls a gun on Ned, who manages to disarm her. Other characters, including a grifter known as T (Chris Noth) and a fence named Cokebottles (Pruitt Taylor Vince of Heavy), surface before different double-crosses lead to the final road rendezvous. ~ Bhob Stewart, Rovi

Critic Reviews for Cold Around the Heart

This is the kind of bad film that can warm the heart of either a corpse or a woman serial killer.

A good twisty thriller. The best David Caruso film during his brief tenure as a big-screen leading man.

Audience Reviews for Cold Around the Heart

Eh, it was alright. Stacey Dash was adorable, David Caruso was too cool for school as usual, but I can say I loved Kelly Lynch. Even though she was a racist man-hating shrew, I loved her! Her character was very bad-ass and spunky and dangerous, and also very hilarious on camera. She was probably the highlight of the entire movie.

Cold Around the Heart Quotes