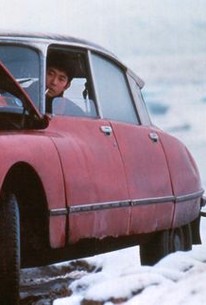 All poor Atsushi Hirata really wants is to leave the cold Japanese winter and take a week's vacation in warm Hawaii. Unfortunately, he ends up forced to honor tradition and travel to even more frigid Iceland to pay tribute to his late parents who died there seven years before. This internationally produced very funny road movie chronicles his many misadventures that begin when he disembarks from his plane in the midst of a blizzard and ends up boarding the wrong bus. The bus takes him to some popular hot springs and he must take a taxi back to Reykjavik. He doesn't make it back, because the driver needed to stop in his hometown and participate in a nativity pageant. This forces poor Hirata to bum a ride on a truck. During the journey, he meets a broad assortment of eccentric and bizarre characters ranging from a woman with a thing about photographing funerals, an aspiring Bonnie and Clyde, and a band of Icelandic cowboys.

If Cold Fever takes too long to come into focus to be fully satisfying, it nonetheless has an undeniably endearing quality. It also looks great and has a driving, eclectic music track.

Like Iceland itself, Cold Fever may seem a trip most audiences initially will reject -- as too distant, too strange, too icebound. They're wrong. Once seen, this cold, feverish wonderland is never forgotten.

The film has an engagingly hip sensibility that never descends into snobbery and an underlying seriousness that lends a touch of poetry to the self-consciously bizarre proceedings.

A one-off that lodges in the memory.

Masatoshi Nagase is mesmerizing in the central role, a model of restraint even when confronted with the quirks of the characters he meets on his journey.

I suppose its quirkiness is a little formulaic (an American outlaw and his girlfriend run from the Iceland police) and its production value is pretty low, but the scenery is great, [and] the story isn't something you'll see every day.

An fascinating film that is both a valentine to the charms of Iceland and a flinty meditation on a young man's quest to bestow a blessing on the parents he took for granted.

Japanese businessman reluctantly travels through wintery Iceland to perform burial ceremony for dead parents. Its a good premise - road rip with extra Icelandic-Japanese culture clash- the scenery is stunning, the lead actor plays a nice mixture of confusion and adaption, and there's a cameo by Seijun Suzuki as the wise old grandfather. Downsides are too many quirky characters popping up along the way, each out-quirking the previous, and too many repetitions of the music & funeral motifs, just in case you missed them the first half a dozen times. The scenery is stunning though.