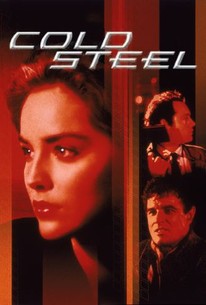 A cop is determined to avenge his father's death in this action-drama. Brad Davis stars as Johnny Modine, a Los Angeles cop whose father is murdered on Christmas Eve. The investigation leads to a bitter and disfigured killer known as Iceman (Jonathan Banks), who has links to Johnny's past as a police cadet. Rocker Adam Ant co-stars and Dorothy Ann Puzo, daughter of famed author Mario Puzo, directed.

Gary Littlejohn
as Man in Wheelchair

Lance E. Nichols
as Other Cop
View All

Cold Steel is to movies what "Happy Birthday to You" is to music.

Even though Midnight Express was the highlight of his film acting career...as a fan... I met Bard Davis on the cinema screen in this portrayal as an over the edge cop seeking revenge for his father's murder...For me this was a memorable action packed role from the eighties. It was okay.