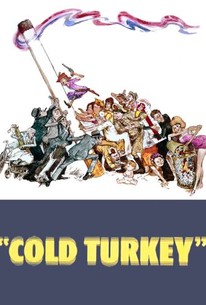 This comedy is notable as the final onscreen appearance (non-speaking) of Edward Everett Horton, a staple comic supporting actor from the early '30s onward. Dick Van Dyke plays an ambitious small-town minister who rallies the whole town to meet a challenge bet by a tobacco corporation. Cooked up by the tobacco company's public relations head (Bob Newhart), the bet is an offer to pay twenty five million dollars ($25,000,000.00) to any town that can quit smoking for the required period of time. Barnard Hughes is Dr. Proctor, a heart surgeon who has to be physically restrained to prevent him from smoking. Jean Stapleton is the mayor's wife, who swells visibly as her eating replaces cigarettes. Edward Everett Horton is eloquent as the mysterious tobacco tycoon who comes to observe the chaos first-hand. There is lots of frantic action as the townsfolk try to win the prize, and the tobacco company (which has no intention of paying off the bet) works to sabotage their efforts. ~ Clarke Fountain, Rovi

Gloria Le Roy
as The Hooker

Harvey Jason
as Hypnotist
View All

The special agony that grips Cold Turkey by the windpipe is how to stop smoking. And the film is funniest when it concentrates on that monumental exercise in will-power beside which the Perils of Pauline pale into minor irritants.

An extended sitcom loaded with the kind of jokes that induce canned laughter.

Irritation mounts as tiresome running gags run the symptoms of nicotine withdrawal into the ground.

It is, within its limitations, a very engaging, very funny movie. The Saran is still there, but it is wrapped around a lot of typical, nasty humor and old-fashioned, clean-cut vulgarity.

Even if you don't smoke, you'll find Cold Turkey funny.

The script for Cold Turkey is fairly ragged, but the movie deserves credit for its willingness to wallow in the murky depths of black comedy.

Lear's vision of consumers, marketers, and politicians all in bed together is as relevant now as it was then.

A sustained joke about a serious subject -- deplorable taste, and good luck to it; the joke is extremely funny in the old Hollywood style, using the idiosyncrasies of the members of a group, drawing farce from straight-faced desperation.

If time has rendered it more a telling social artifact than a comedy classic, the ending remains powerful and thoughtful as a postscript to pandemonium.

Unfortunately, none of it seems to matter to any of them after the initial shock of having their dirty laundry aired.

The film marked the directing debut of Norman Lear and very much reflects the time in which it was made.

The best thing about the movie was the appearance of Bob and Ray as TV personality newscasters.

A very funny movie, with a good story and a good cast. I liked it.