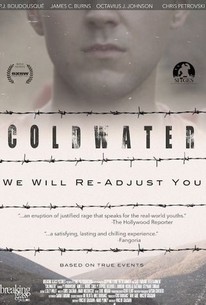 Brad Lunders is a teenager forcefully abducted from his home in the middle of the night by his mother's consent to a harsh wilderness reform facility. There is no contact with the outside world and the retired war colonel in charge prides himself on breaking an inmate's spirit in order to correct delinquent behavior. As we learn of the tragic events that led to Brad's arrival, unforeseen circumstances threaten to tear the already eroding reform facility apart, forcing Brad to confront not only his fellow inmates and the personnel in charge, but finally his own sense of what is right and what is wrong. (c) Official Site

The film transcends its B-movie template with realistic performances and taut direction, yet never spares the thrills.

For a first time feature outing, "Coldwater" is a fine effort from Grashaw, and the setting feels fresh and new. It's an original take on a coming of age, young masculinity tale, but ultimately, it doesn't quite live up to all of its potential

The best thing about it is its star, P.J. Boudousqué, who locates a sense of terror and betrayal that the script lacks.

It's a promising topic for a drama, and Greshaw's talented leading man carries it until the filmmaker steals it from him and destroys everything built up in the first hour.

There's a compelling, perhaps important thriller to be made about dark doings at for-profit juvenile detention camps, but "Coldwater" misses the mark.

There are glimpses, perhaps too brief for most moviegoers, of humanity contained within these characters.

"Coldwater" is at its best when it lets the emotions emerge gradually from its steely characters rather than when they're demonstrated openly, the reserved feelings ultimately building to a frenzied crescendo at the end.

It's a cat and mouse game with government officials threatening sanctions that never evolve into anything tangible as the boys discover their fate rests in their own hands with a nightmarish Lord of Flies-esque climax.

A rather classic, but skillfully - and tastefully, despite the graphic content - executed drama that tracks the painful blossoming of maturity during a crisis of authority and morality.

It's a grim but engaging drama and a first feature from writer/director Vincent Grashaw.

Grashaw draws out fascinating, textured performances from his cast, notably James C. Burns as the retired marine in charge and Nicholas Bateman as a conflicted trustee.

There are no featured audience reviews yet. Click the link below to see what others say about Coldwater!