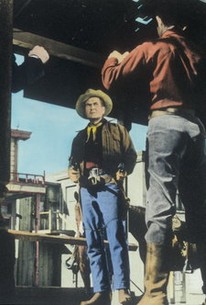 Frank Lovejoy plays the title role in Cole Younger, Gunfighter. The scene is post-Civil War Texas, when the state was under the despotic control of the "bluebellies"-corrupt law enforcement officials, answerable only to carpetbagger-governer E. J. Davis. Persecuting Texans in general and Rebel sympathizers in particular, the bluebellies make life hell for everyone with whom they come in contact. Only a few courageous souls like Kit (James Best) are willing to stand up to these uniformed bullies, and in so doing they find themselves branded as outlaws. While hiding out from the authorities, Kit befriends desperado Cole Younger, believing him to be a kindred spirit. Younger proves that he's a "right guy" by saving Kit from a trumped-up murder charge.

There are no critic reviews yet for Cole Younger, Gunfighter. Keep checking Rotten Tomatoes for updates!

There are no featured reviews for Cole Younger, Gunfighter at this time.