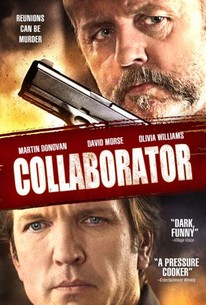 Robert Longfellow (Martin Donovan) is a famous playwright who can't seem to catch a break. His recent Broadway play was met with horrible reviews and an early cancellation, and his marriage is being tested as an old flame (Olivia Williams) has reentered his life during a particular moment of weakness. Retreating back to his childhood home to visit his mother (Katherine Helmond), Robert crosses paths with his childhood neighbor, Gus (David Morse). A right-wing, ex-con who still lives at home with his mother, Gus is Robert's polar opposite in every possible way. When Gus holds Robert hostage at gunpoint during a drunken reunion gone terribly wrong, the drama unfolds as social status, celebrity and the imminent threat of violence converge, building up to a climax that will leave both men forever changed. -- (C) Tribeca

Mary B. Ward
as Radio Host

Clive Henderson
as Detective
View All

Oddly, it's Donovan's performance here that proves the movie's weakest link, though his writing and helming tie for a close second.

A witty and well-paced thriller.

Morse and Donovan hold us rapt in this clearly told tale about identity confusion.

What really matters is the interplay between two fine actors, the icy Donovan and the fiery Morse.

Both characters are riveting, and they even manage to earn most of the freight that Donovan loads onto his heavily ironic title.

An exceedingly earnest, high-minded hostage drama in which any visceral tension is secondary to topical debates by a captor and his prisoner.

Although the film has more than its share of fun with the culture clash between Robert and Gus, it also gives dignity to both of them, weaponizing their ideas and rendering the outcome far less interesting than the path to getting there.

Though apparently written for the screen by writer/director/star Martin Donovan, Collaborator has the feel of a two-man stage production expanded for the big screen. And on some level, it may have actually worked better as a play.

...the movie's various problems [are] exacerbated by a complete and total absence of suspense or tension.

Overall, The Collaborator is the type of film that rewards repeated viewings.

Collaborator is a sharp and vital debut that keeps viewers guessing at all the right moments.

A solid, character-based drama that speaks to the disappointments of middle age and mortality in general, Collaborator doesn't let anyone off the hook -- not even the viewer.

Slow moving, but really quite enjoyed this. Interesting story about a writer who returns home to visit his mother after a professional set back. He revisits the girl he left behind and gets into more than he bargained for with the neighbour, a 57 year old man who has never left home and has a few issues of his own. Definitely an original story, and the usual good acting you can expect from Martin Donovan.

I had wondered where Martin Donovan had gone after being a staple in so many Hal Hartley films. It turns out that he was preparing to do this one..an act/direct job that is sharply written and benefits from two wonderful character actors. David Morse is unbelievable.

After two straight flops on Broadway, playwright Robert Longfellow(Martin Donovan, who also wrote and directed) needs to desperately recharge his batteries. So, he returns home to Los Angeles to visit his mother(Katherine Helmond) while his wife Alice(Melissa Auf der Maur) and two children stay behind. While there, he is hired to do some script doctoring before meeting with Emma(Olivia Williams), an actress and old friend, who has better ideas, not only professionaly but personally. Seeing as how Robert is so busy, it might be understandable how he has not been able to find the time to have a beer with Gus(David Morse), a friend from the neighborhood. "Collaborator" is a movie that defly defies expectations and cliches by taking a low key approach to the material. The lone exception is a remarkable emotional explosion that one character has kept pent up for decades to thankfully express an opinion which I have also been waiting a long time for somebody else to bring up, even if it has to come from a character who is so smug. Since they were shaped in different ways by the same incident, Robert probably looks at Gus in a 'there but for the grace of you-know-who, go I' kind of way; clues to which are slowly revealed throughout the movie. In other words, Robert cannot escape his past, just as his present is unraveling, despite his success in life.