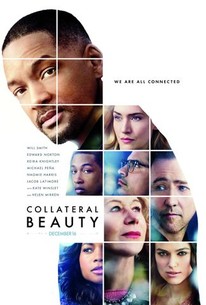 When a successful New York advertising executive suffers a great tragedy he retreats from life. While his concerned friends try desperately to reconnect with him, he seeks answers from the universe by writing letters to Love, Time and Death. But it's not until his notes bring unexpected personal responses that he begins to understand how these constants interlock in a life fully lived, and how even the deepest loss can reveal moments of meaning and beauty.

Will Smith
as Howard

Kate Winslet
as Claire
View All

How Family-Friendly is Beauty and the Beast?
On DVD This Week: Fences, Passengers, Elle, and More
Razzie Award 2017 “Winners” Announced

Why did it get made? And how much did its gifted cast of big names have to be paid to enable them to suspend disbelief and commit themselves to such a concentrated dose of drivel?

Collateral Beauty sets a record: it is probably the worst movie each of these fine actors will ever do.

Despite its quality cast and slick visuals, the result is sombre and saccharine rather than uplifting.

As it proceeds the plot becomes increasingly predictable and the "surprise" elements will surprise only the most credulous.

The only thing more remarkable than the crudeness of the central idea is the extensive cast of A-listers who decided this synthetic weepy with its fortune-cookie wisdom was a good thing to do.

If it were any more pretentiously fey it would evaporate; any more arch and it could stand at the top of the Champs-Élysées overseeing traffic.

I agree that it's emotionally manipulative but it's also inspirational and a heartwarming, if unrealistic, reminder to see the beauty all around us...

The closest this train wreck will get to Oscar is if some guy with that name makes the poor choice to go see it during its theatrical run.

The worst thing here, perhaps, is that it seems to be Frankel's direction that convolutes everything.

It was only half bad.

Directed by David Frankel, Collateral Beauty packs an impressive amount of failure into a film that barely crosses the 95-minute mark.

Everyone shows up to work on this floundered hope of a film ( ironically meant to foster hope ), that actually fails from the very beginning, from the first moments of film, to hide that everyone is in fact clock-watching until it's time to go home. Only Norton even appears to be trying.

Although January has been known to be the dumping ground for films that studios don't believe in, December has also become that month as well. Yes, December and January is usually when you can go to any cinema and find a handful of films that will be nominated for #Oscars, ensuring your satisfaction at the movies. Having said that, smaller studio films are placed next to a huge blockbuster, because they don't know where else to place it. After seeing a few trailers for Collateral Beauty it truly made me think it was going to be a very enjoyable time at the theatre. Sadly, there is a reason that it was released alongside Rogue One: A Star Wars Story, not due to the fact that it wanted to compete for best quality, but because it really won't end up finding a huge fanbase. Why? Collateral Beauty is one of the most manipulative films I have seen in a long time. Let's dive in. Minor spoilers to follow. Read at your own risk. The plot of this film will be jarring to explain for those who don't know, because the trailers have technically been lying to you. Making it out to be a happy-go-lucky film about a man who has lost a child and is visited by embodiments of love, time, and death, Collateral Beauty masks its actual story, which really is about a man who is grieving the loss of his daughter, but also is about to lose his company, due to lack of focus. His employees gather together and hire actors to portray the embodiments of love, time, and death in order to stoop to his level after he writes letters to these "things." Not only is this a very mean-spirited film in my personal opinion, but it also takes away the magic of what the trailers advertise, even if that story would have been cheesier. If I had to choose between a mean-spirited or a sappy film, I would have choose sappy every day of the week. Although I have to admit that I disliked this film overall, the biggest compliment I can give Collateral Beauty, is the fact that it kept pulling me back in, due to the terrific performances. Everyone in this film seems to be giving it their all here, especially Will Smith. He is a man of very few words here, but his expressions and few scenes of complete mental and emotional breakdowns were truly heartbreaking. Helen Mirren, Keira Knightley, Michael Pena, Edward Norton, Kate Winslet, Naomi Harris, and Jacob Latimore all give commendable performances, and play off of each other in quite a believable way. Sadly, looking back on this film, these performances are what made this bore of a film watchable. Sure, the film is competently made, but there was so much room for expansion. The most frustrating aspect about Collateral Beauty was the amount of side stories with every character. The core story here is about Howard (Will Smith), but everyone else receives just as much screen time as him in order to develop their relationships outside of work. These people are supposed to be his friends, yet they do a very mean thing to him, and yet we are also supposed to care about their personal lives, while the story needs you to care about Howard the most. On top of that, just so that the film can have a big reveal in its final act, Howard's backstory is completely glossed over and given to the audience periodically throughout the film. This made the film extremely messy and I hardly found myself emotionally invested in any of it. In the end, Collateral Beauty it far too manipulative to fully enjoy and although I undoubtedly admired the fact that this is an original film, it was too messy to connect with me. I didn't like this film very much, but the performances are all terrific and while they do belong in a better film, that is the sole aspect that kept latching me on. I was able to grasp onto a few elements and Will Smith made me shed a tear for an instant, but only due to the fact that he committed himself to this role. The story itself is completely lacking depth and should have stuck with a more spiritual route in my opinion. It is competently directed by David Frankel, but sloppily constructed by writer Allan Loeb, who has actually made a couple films I have enjoyed in the past, such as 21. I found myself going back and forth between liking and disliking Collateral Beauty, but in the end, it is completely forgettable and I'll probably never find myself revisiting it. I can't get myself to recommend this film to anyone, but if you are a fan of any of these actors, you'll at least enjoy their performance. This is a mediocre premise that needed some tweaking, but ultimately even falls short of that pedestal as a whole.

Ultimately this movie offers little surprises, but it's pretentiousness and feel good vibe might be enough to sway you into enjoying this A lister and heart felt film.