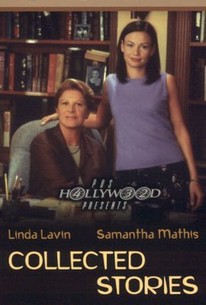 Six years in the lives of two intensely creative people are chronicled in this TV-movie adaptation of Donald Margulies' award-winning play +Collected Stories. Repeating their roles from the original 1999 theatrical production, Linda Lavin and Samantha Mathis are cast respectively as esteemed author Prof. Ruth Steiner and Ruth's most devoted disciple Lisa Morrison. Hoping to become a writer herself, Lisa latches on to Ruth for consul, advice, and moral support. The trouble begins when Lisa actually gets into print -- and her reputation begins to surpass that of her mentor Ruth. The TV version of +Collected Stories first aired January 16, 2002, as part of the PBS Hollywood Presents anthology.

The desperate need to connect -- with art, with artists -- is beautifully expressed in PBS' presentation of Collected Stories.

There are no featured reviews for Collected Stories at this time.