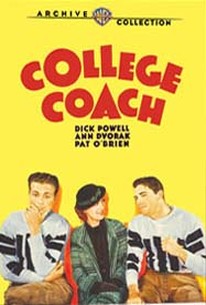 It just seems that Pat O'Brien played nothing but priests and football coaches. As star of College Coach, O'Brien is far less likable than he'd be seven years later in Knute Rockne, All-American. Here he ruthlessly drives his team to victory at all costs, alienating his wife (Ann Dvorak) in the process. The bite of the plotline was blunted towards the end when O'Brien turns nice guy and the team plays just for the fun of it. Watch for an early College Coach scene in which student Dick Powell has a brief hallway conversation with a classmate--played by bit actor John Wayne.

Joseph Sauer
as Holcomb
View All

There are no critic reviews yet for College Coach (Football Coach ). Keep checking Rotten Tomatoes for updates!

There are no featured reviews for College Coach (Football Coach ) at this time.