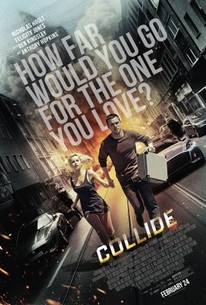 After a heist goes terribly wrong, Casey Stein (Nicholas Hoult) finds himself on the run from a ruthless gang headed by mob boss Hagen (Anthony Hopkins). Now Casey has precious cargo that belongs to Hagen, who will stop at nothing to retrieve it. Left with no choice, Casey calls his former employer and drug smuggler Geran (Ben Kingsley) to protect his long-time girlfriend Juliette before Hagen gets his hands on her. Casey sets out on an adrenaline-fueled car chase on the German highways to save the love of his life before it's too late.

On DVD This Week: Fist Fight, Before I Fall, and More
Get Out Is Certified Fresh

In the end, Collide is a cheap genre product produced with an eye on foreign market box office. Wake me when Dominic Toretto torques his way into Havana.

Hoult and Jones are unable to breathe much life into their bland characters, and it's ultimately sad to watch the former Hannibal Lecter and Gandhi reduced to playing silly, tough-guy caricatures.

Unexceptional, a hodgepodge of corny voice-over and repetitive, anticlimactic plotting, with Hoult and Jones miscast as a couple of party-hardy American expats.

The kind of low-rent action movie that only exists because everybody involved knew that nobody in the Western world would ever see it.

I don't subscribe to the notion that a piece of art shows its entire hand within its first ten minutes, but director Eran Creevy's third feature doesn't inspire a whole lot of confidence with its bland introduction.

A flatly earnest Hoult and Jones are hamstrung by drippy dialogue, while Kingsley and Hopkins overplay their more colorful parts - with the former doing a cartoonish Turkish accent and the latter delivering lines with strange emphasis.

With tricky flashbacks and dodgy accents throwing sand in the engine, this car-chase thriller stutters and sputters a fair bit before it gets going. Yet when Hoult's fugitive hero hits the autobahn, the movie delivers an exhilarating turn of speed.

The scenes are so over the top that they turn out quite entertaining, and even funny. [Full review in Spanish]

Its big problem relies in its initial approach, as silly as implausible. [Full Review in Spanish]

If you're in the mood for some mindless action built around a threadbare plot, then Collide fits the bill. Otherwise, you're very likely to find this film downright disappointing.

Extended sequences of high-speed highway driving interspersed with occasional interludes of hackneyed dialogue, clichés and wildly unlikely situations, that's what you get with Collide.

Collide is a textbook example of a junk movie that studios choose to dump into theaters to fill the dead zone of February.

Collide is safe proof. When the fun in Collide begins, it hardly ends with a bang and leaves itself in its roots and never grows to be the flower it wanted to be. Maybe if this was taken more seriously and if they had more time to make it, this wouldn't even bother failing.