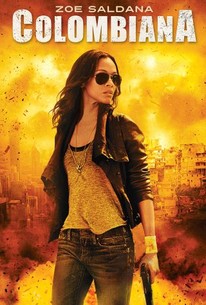 Critics Consensus: Zoe Saldana has the chops but she's taken out by erratic and sloppy filmmaking.

Critics Consensus: Zoe Saldana has the chops but she's taken out by erratic and sloppy filmmaking.

Critic Consensus: Zoe Saldana has the chops but she's taken out by erratic and sloppy filmmaking.

In the action film Colombiana, Zoe Saldana plays Cataleya, a young woman who has grown up to be an assassin after witnessing the murder of her parents as a child. Turning herself into a professional killer and working for her uncle, she remains focused on her ultimate goal: to hunt down and get revenge on the mobster responsible for her parents' deaths. -- (C) Sony Pictures

Benoit Lavelatte
as Thug
View All

Acclaimed writer Luc Besson (The Professional, Taken, The Fifth Element) co-writes another action-packed movie that even with a few outrageous moments is still a smart, sexy thriller with a good story that propels Saldana's star power.

Colombiana has one true asset -- the seminude sight of its star, Zoe Saldana -- and milks it for everything it's worth.

Half the dialogue between these dirtbags is devoted to her near-invisibility, and all of it's awful: "She's like mist," apparently.

Even the talented Saldana can't make a silk purse out of a sow's ear - much less a dog's dinner.

Occasionally enjoyable in a silly way, but I have to say Besson's preoccupation with the little-girl-becomes-killer trope is looking a little unwholesome.

Colombiana wants to be Bourne with boobs, but its connect-the-dots narrative and silted script means it can't quite reach those bone-crunching heights.

never achieves the intellectual and emotional depth to which it at times seems to aspire.

Some solid ass kicking action to back up what the script lacks.

Leaves us not even a second of viewing time that is believable.

The final apocalyptic fistfight between Cattaleya and Marco is shot in kinetic jerky fast forward, presumably because the director was worried the clock would run out.

Saldana is a compelling screen presence and is compulsively watchable, but the film around her is a tired, hackneyed mess

Zoe Saldana's charisma not withstanding, Colombiana is the female equivalent of a Jason Statham film, i.e. badass but bland.

While the action sequences this revenge thriller has to offer are well executed and edited, all other scenes in between are oddly boring. Even the decent actors can't fight against a mediocre script and writing. The showdown isn't much to write home about either. A single protagonist going on a revenge rampage doesn't allow for much surprise or excitement. When Cash sings "Hurt" over the end credits it's not only a random choice but also a much more emotional and touching ending than this film deserves.

Zoe Saldana is slinky, sexy, and mad as hell as Cataleya, a contract killer bent on avenging her family who was killed..."in front of [her]"...a line from the trailer that I thought was delivered a little too emphatically. Saldana's dancer physicality is evident when Cataleya snakes through air ducts, swims with the sharks, and pratwaddles in a drunken ruse. The action is gripping enough, but Michael Vartan is forever contractually obligated to play Michael Vartan - the handsome, oblivious beau with a gracious smile and twinkling eyes.

The lone-wolf-getting-revenge type of movie. I liked it - sure it has no redeeming social message, but it is always fun to see the underdog get her revenge.

Trying not to compare too much to the classic hitman flick 'Leon' this female assassin flick tries too hard for its own good to raise emotion and thrills. Its not that its a bad film, far from it, its a solid action film and you must give the director and cast credit for making the film much better than it deserves to be but at the end of the day the film is very predictable and simply nothing new. The cast are very good in this film with a strong brooding presence from Saldana who does actually come across as a capable killer but the Colombian bad guys are all pretty cliched with their stubble and shades. Performances from Curtis as the mentor/uncle, James as the 'always one step behind' FBI and a decent small role for McTavish as a Marshall with a very good US accent all add to a well rounded and understated cast that really do make the film quite believeable...at times. I wonder who is the better young innocent pre-hitgirl? the young Stenberg or the young Portman? hard to decide really, the young 'Cataleya' is slightly unbelievable as she leaps and bounds over rooftops like a pro gymnast when the baddies go after her, after she sticks a henchman with a blade!. Not really how a young child would behave methinks but I guess she is suppose to be gifted, its just less realistic when watching. One problem with the film is the forced emotional aspects which I found hard to accept, 'Emilio' the uncle and mentor of Cataleya is some kind of underground thug or mafia type who gunned down an innocent person in their car to prove a point to a young Cataleya and Cataleya's family from Columbia were all involved with drug trafficking, they had guns stashed around the house!! so really its kinda hard to feel for Cataleya and what she's doing as everyone she knows/has known is a criminal. Also you wonder how she becomes an elite killer, who trained her? Emilio the uncle? was he some kind of super killer too? he merely comes across as a Colombian goodfella type. The film can't quite capture the close emotion of a certain Besson classic and like with all modern films ends up relying on flashy action set pieces to make up for it when a more subdued approach would have worked wonders, the final curtain for the main bad guy is also quite stupid. Solid but nothing new to offer over other good female assassin flicks such as 'Nikita' and remake 'Point of No Return' aka 'The Assassin', but you have to wonder why Besson is so obsessed with assassin films that he keeps remaking the same thing over and over.