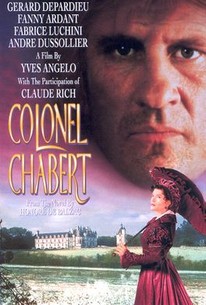 This metaphorical drama, about the changes brought to French society by revolution, stars Gérard Depardieu as Chabert, a French soldier who served under Napoleon in 1807 and was thought to have died in battle. In fact, Chabert was nearly buried in a mass grave with a large number of deceased soldiers, but he managed to crawl from the pile of corpses and has been wandering through the French countryside ever since. In the ten years since his "death," Chabert's wife (Fanny Ardant) has spent his fortune and gone on to marry Count Ferraud (Andre Dussolier), which has made her a woman of wealth and power. When Chabert, now a lumbering tramp, confronts the Countess, she refuses to admit that he was once her husband, and Chabert takes her to court to recover his money and property. Colonel Chabert was based on a novella by Honoré de Balzac, and it marked the directorial debut of Yves Angelo, previously one of France's top cinematographers.

Isabelle Wolfe
as Nun
View All

First review! Great adaptation of Balzac's famous novel with beautiful visuals and outstanding performances from Gérard Depardieu and Fabrice Luchini. Not much to say about it, specifically: acting, cinematography, story, writing - they're all very good, making for a rock-solid period piece which was nominated for six of France's highest prizes for cinema (the César awards).