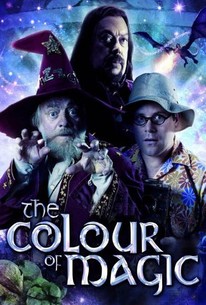 The Colour of Magic Photos

David Jason, Tim Curry, Nigel Planer, and Sean Astin star in writer/director Vadim Jean's imaginative adaptation of The Colour of Magic and The Light Fantastic -- the first two books in author Terry Pratchett's popular Discworld series of fantasy adventure novels. Naïve tourist Twoflower (Astin) is on holiday in Ankh-Morpork when a terrible fire breaks out, forcing him to flee from the city alongside an incompetent wizard named Rincewind (Jason). Now, as the clueless pair set out on a magical journey across the disc, neither realizes that they are merely pawns in an elaborate board game being played by the gods. After encountering a pair of barbarians on their way out of Morpork, Twoflower and Rincewind take a trip to an inverted mountain housing dragons that only exist in imagination, survive a fall off the edge of the disc during a perilous visit to the country Krull, and attempt to beat Rincewind's former classmate Trymon (Curry) to a collection of eight spells that could save Discworld from total destruction.

David Bradley
as Cohen the Barbarian

Liz May Brice
as Herrena

Critic Reviews for The Colour of Magic

The Color of Magic mashes together a pair of comedic fantasy novels by Terry Pratchett into one long, rambling saga.

Unwatchable and nothing more.

Audience Reviews for The Colour of Magic

An all star cast (for England) in a follow up to the previous years Hogfather. Unfortunately like the Hogfather this doesn't really work. The film (split into two parts on TV) drags something chronic and even Pratchett admits in the introduction that the original story has no plot as such. There are some glaring errors in the directing and editing that distract sometimes and the casting isn't perfect. Sean Astin is having fun as the naive and innocent tourist and David Bradley is great as the Barbarian but Tim Curry does his villain schtick with no real invention (apart from a slight Northern accent that keeps coming and going) and David Jason looks tired and a bit bored. Suspect Pratchett probably would work better as animation or with an experimental director like Terry Gilliam. This just falls short or being that good.

The Colour of Magic Quotes