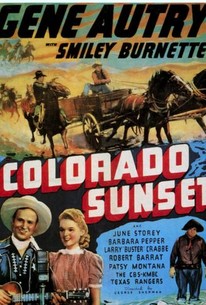 Gene Autry and his rough ridin' crew help to stop a milk war between rival dairy ranchers and an oppressive "protection" organization in this western. It all begins when Gene and company head off to the ranch their pal Smiley Burnette has just purchased for them. They told him to get a cattle ranch. Instead the bumbling Burnette has used their money to buy a dairy ranch. Later after Autry stops the war and restores the peace, he is elected sheriff.

Patsy Montana
as Herself

Ethan Laidlaw
as Man Who Puts Up Poster (uncredited)

The CBS-KMBC Texas Rangers
as Themselves

There are no critic reviews yet for Colorado Sunset. Keep checking Rotten Tomatoes for updates!

There are no featured reviews for Colorado Sunset at this time.