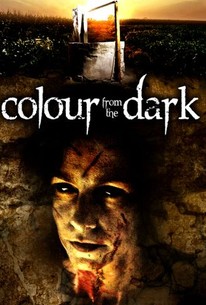 Colour from the Dark Photos

The next generation of Italian horror arrives with Bad Brains director Ivan Zuccon's adaptation of the classic H.P. Lovecraft story The Colour Out of Space. It's the 1940s. The entire planet is at war, yet Pietro and Lucia live on a peaceful, isolated farm with Lucia's fifteen year old sister Alice, who suffers from severe mental problems. Unlike his three brothers, Pietro has been spared from fighting due to a deformed knee. But even despite Pietro's crippling malady, the poor farmer works tirelessly to till the soil and care for his crops so that his family will be able to eat. Then, one day, as Pietro and Alice attempt to draw water from their well, they inadvertently release something from deep within the Earth's womb. Entranced, the couple peers down the well to see an otherworldly color flutter beneath the water before disappearing without a trace. In the following days, the entire farm is beset by a series of inexplicable occurrences. When the sun falls over the horizon, the surrounding vegetation begins to glow with a sinister light that seems not of this Earth. As the color continues to spread throughout the farm, into the family home, and ultimately into the very minds of Pietro and his family, they are gradually drawn into a sickening world of suffering, blood, and death.

Allesandra Guerzoni
as Teresa
View All

Critic Reviews for Colour from the Dark

There are no critic reviews yet for Colour from the Dark. Keep checking Rotten Tomatoes for updates!

Audience Reviews for Colour from the Dark

There are no featured audience reviews yet. Click the link below to see what others say about Colour from the Dark!

Colour from the Dark Quotes