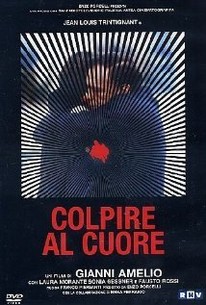 In this rich, complex drama, the threat of terrorism serves as a backdrop to an examination of dysfunctional family relationships. Fausto Rossi portrays neglected teenager Emilio, whose father Dario (Jean-Louis Trintignant), a university professor, introduces him to his student, Giulia (Laura Morante) and her lover, Sandro (Vanni Corbellini). Emilio loves photography, and sets about taking pictures of the pair, soon coming to believe that Giulia and his father are lovers. Because Dario and his son are respectful of each other's privacy to a fault, Emilio can't ask, so he starts to spy. When he finds Sandro dead in the street one day, the apparent victim of a Red Brigade terrorist shooting, Emilio decides to keep an even closer eye on his father. It is never completely confirmed whether Dario and Giulia were really having an affair or whether Dario was involved in terrorism, because these issues are not necessarily director Gianni Amelio's concern. Amelio is concerned with perception, and in this fascinating film he examines his young protagonist's multi-faceted interpretations of an elusive truth, revealing that such a thing may not even exist. This is a powerful, absorbing film for thoughtful viewers in search of a challenge. ~ Robert Firsching, Rovi

There are no critic reviews yet for Colpire al cuore. Keep checking Rotten Tomatoes for updates!

There are no featured reviews for Colpire al cuore at this time.