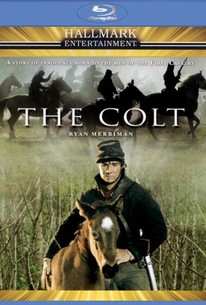 The made-for-cable The Colt takes place in Virginia in the fourth year of the Civil War. The mare owned by young Jim Rabb (Ryan Merriman) of the First Michigan Cavalry gives birth to a colt, which battle-weary Sgt. Longacre (Steve Bacic) orders Jim to shoot so as not to slow down the other soldiers in the unit. Jim refuses to do so, risking severe disciplinary action. As it turns out, the Confederates strike before Longacre does, stealing both colt and mare. Again defying orders, Jim heads out alone to rescue his beloved horses, saving the life of a dying Rebel prisoner along the way. Ultimately, the colt proves to be an inspiration to Jim's comrades in arms, and is duly immortalized by another member of the First Michigan, army artist Covington (Darcy Belsher). An uplifting tale of unassailable innocence in the midst of America's bloodiest war, The Colt made its Hallmark channel debut on July 9, 2005.

Cassandra Sawtell
as Sarah
View All

Critic Reviews for The Colt

There are no critic reviews yet for The Colt. Keep checking Rotten Tomatoes for updates!

Audience Reviews for The Colt

For a hallmark movie, this movie was super-good. It was pretty accurate dealing with the Civil War, and really gave you a look into the Civil War Soldiers life, beyond any seriously historic battles. For not going into theaters, this movie ruled all. People who arent interested, or havent been inspired too watch it, take my word for it - you'll like it