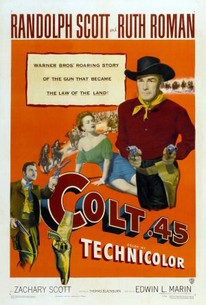 The Randolph Scott western Colt .45 was retitled for TV so as not to be confused with the TV series of the same name. The new title, Thundercloud, misleads the audience into expecting a Native American epic. Actually the film involves a gun salesman (Randolph Scott) whose sample case of Colt 45's is stolen by an outlaw (Zachary Scott--no relation to Randolph). Accused of being a member of the outlaw gang when they start using the Colts in their holdups, the salesman is obliged to track down the crooks. Thundercloud, or Colt .45, represented the last film of supporting actor Alan Hale Sr. ~ Hal Erickson, Rovi

William Steele
as Henchman
View All

There are no critic reviews yet for Colt .45. Keep checking Rotten Tomatoes for updates!

There are no featured reviews for Colt .45 at this time.