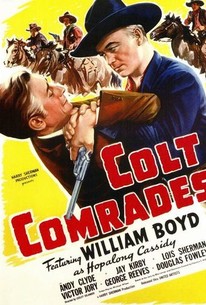 The winning streak of superior Hopalong Cassidy westerns continued with 1943's Colt Comrades. In this one, Hoppy (William Boyd) and his saddle pals California (Andy Clyde) and Johnny (Jay Kirby) use a large amount of reward money to buy their own ranch. But despotic Jebb Hardin (Victor Jory), who controls the local water rights, makes life difficult for our three heroes and their ranching partner Lin Whitlock (George Reeves). When Hoppy proves a bit too tough and resiliant for Hardin, the villain begins plotting and planning the hero's hasty demise. The film's best moments include an elaborate confidence scam, with California as the sucker and Wildcat Willy (Earl Hodgins) as the suck-ee.

There are no critic reviews yet for Colt Comrades. Keep checking Rotten Tomatoes for updates!

There are no featured reviews for Colt Comrades at this time.