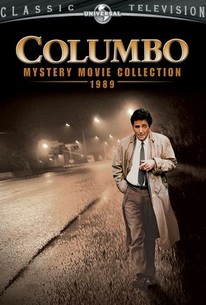 Columbo: Murder, A Self Portrait stars Patrick Bauchau as an artist hounded by a contentious ex-wife (Fionulla Flanagan). He murders his former spouse on the beach at Malibu, but arranges things to make it seem he was far away in his art studio at the time of the killing. Lt. Columbo (Peter Falk) has heard this song before, and he meticulously chips away at the artist's alibi. Also in the cast is Shera Danese, a.k.a. Mrs. Peter Falk. Murder, A Self Portrait was one of the handful of Columbo 2-hour episodes shown during the 1989-1990 season on The ABC Saturday Mystery Movie.

There are no critic reviews yet for Columbo: Murder, A Self-Portrait. Keep checking Rotten Tomatoes for updates!

Stylistic and well-crafted, Murder, A Self Portrait is a noir thriller that's fun and exciting. While investigating a drowning Lt. Columbo suspects the victim's ex-husband, famous painter Max Barsini, of killing her, and attempts to prove it by using her dream therapy tape recordings. The characters are quite interesting and are developed fairly well. The visual style of the film is also impressive, especially in its usage of noir undertones. Murder, A Self Portrait is an artistic and intriguing mystery film that's full of suspense.