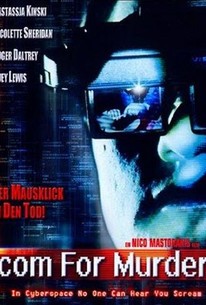 Written and directed by Nico Mastorakis, .com for Murder centers around Sondra Brummel (Nastassja Kinski), who bedridden after a skiing accident, unwittingly chats it up online with a potential murderer. Along with Misty (Nicollette Sheridan), her sister, Sondra is determined to thwart her would-be killer's efforts. Guest stars include rockers Huey Lewis and Roger Daltrey, who play an FBI agent and Sondra's boyfriend, respectively.

Critic Reviews for .com for Murder

The only consolation is the adorable Nastassja Kinski.

Audience Reviews for .com for Murder

There are no featured audience reviews yet. Click the link below to see what others say about .com for Murder!