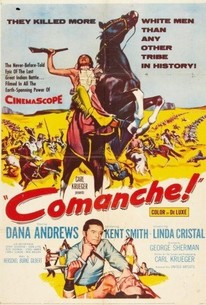 Comanche is one of several 1950s westerns sympathetic to the Indian point of view. Dana Andrews stars as a frontier scout who hopes to shield his Native American friends from the genocidal machinations of bigoted Cavalry officer John Litel. Comanche chief Kent Smith likewise wants to keep the peace, and likewise is plagued by a xenophobic colleague, hotheaded Indian brave Henry Brandon. Linda Cristal provides the romantic interest, while Nestor Paiva is there for laughs. Purportedly based on fact (at least that's what the producers claim in the opening titles), Comanche is just as entertaining as any fictional film on the subject.

Purports to be based on the true way these bloody incidents with the Comanches, the cavalry and the raids into the Mexican border towns actually happened.

There are no featured reviews for Comanche at this time.