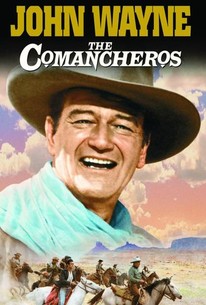 Based on a novel by Paul I. Wellman, The Comancheros stars John Wayne and Stuart Whitman as a Texas Ranger and roguish gambler, respectively. Reluctantly joining forces, Wayne and Whitman try to round up the "comancheros" -- renegade whites who've aligned with the Indians in smuggling guns and whisky. Ina Balin plays the daughter of comanchero chieftain Nehemiah Persoff, who rescues Stu and the Duke when they're captured by the renegades. After the anticipated climactic battle, Wayne allows Whitman and Balin -- fugitives from justice both--to ride into the sunset together. The last film directed by the estimable Michael Curtiz, The Comancheros is fine testosterone-laden entertainment. Keep an eye out for veteran western stars Bob Steele and Guinn "Big Boy" Williams in uncredited supporting roles. More than a few elements from The Comancheros would find their way into Sam Peckinpah's The Wild Bunch, albeit without the happy ending.

Critic Reviews for The Comancheros

Charming and agreeable, it moves along at a good clip. Shot in widescreen saturated CinemaScope, ... it's entertaining in a predictable way.

Because he was largely a journeyman filmmaker who took whatever jobs the studio assigned him, most historians and critics regard Michael Curtiz merely as a capable gun-for-hire who was lucky enough to find himself attached to good projects.

Wayne is decent, but this is a compromised Western due to the fact that ailing director Michael Curtiz (it's his last film) has no appreciation for the genre.

Lively and cheerful, but too banal to be a top-rate Curtiz or Wayne film; nevertheless it's a pleasingly entertaining film.

Audience Reviews for The Comancheros

Michael Curtiz' last film is a solid and layered piece of actioner as a Texas Ranger tries to take out some knuckleheads suppling rifles to the Comanches. Yeah sure, it's a John Wayne film (and don't you forget it, pilgrim!) but there's room for everyone here. The word rollicking comes to mind.

A great cast in a very enjoyable Wayne western. One that has more below the surface than your typical western of the time. I especially enjoyed Lee Marvin, though his stint was too short. Interesting and fresh storyline as well.

This action-western picture of John Wayne is absolutely which has not one dull moment. It has lots of nice moments between the Texas Ranger (played by Wayne) and gambler (Stuart Whitman) as the unlikely partners to take on the villians of Comancheros.

More solid western action from John Wayne who strikes up a fun buddy partnership with fugitive Stuart Whitman. The heroine's willingness to sell out her father and friends so easily is a little lacking in credibility, but pretty good on the whole. There's also a memorable cameo from Lee Marvin.