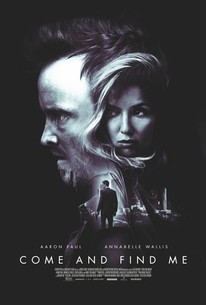 Come And Find Me Photos

David (Aaron Paul) and Claire's (Annabelle Wallis) idyllic relationship comes to an abrupt and mysterious end after Claire disappears without a trace. Devastated but incapable of letting go, David follows her trail down a frantic and increasingly dangerous path. Shocked at discovering Claire was living a double life, he's forced to risk everything if he ever wants to see her again.

Critic Reviews for Come And Find Me

You've seen this sort of thriller many times before, and done much better.

There's nothing to Come and Find Me beyond a superficial investment in its central characters' romantic relationship.

"What a mess," one of the movie's villains says at one point. "Nothing's gone as I intended. Not one thing." He doesn't know the half of it.

This remains a taut, haunting ride thanks to solid writing and directing by Zack Whedon (Joss and Jed's younger brother) and a strong, sympathetic performance by Paul.

Most likeminded films spend approximately 20 minutes on the same material covered by the entirety of Come and Find Me - a fact that leaves this mystery from writer/director Zack Whedon (brother of Joss) feeling insufferably drawn out.

There's enough action, suspense, and even romance to overcome the increasing skepticism that begins to overwhelm the movie's third act.

Come and Find Me is lacking in suspense and that lacking tension undermines some really interesting ideas that get buried as the film progresses.

There are some good twists and bluffs in Come and Find Me, but the weight of the film is in David's love for Claire.

Thriller fans should also check it out, as the tightly crafted script keeps audiences on their toes. It's a great debut effort from Zack Whedon...

Mystery thriller Come and Find Me has its share of suspenseful scenes, but countless flashback scenes... slow the film's momentum and stop us buying its many far-fetched twists.

Emotionally gripping and visually arresting, the last section of Come and Find Me resists the conventions of closure closures of gender and genre.

Audience Reviews for Come And Find Me

I would've watched this much sooner had I known a Whedon was in charge. The film operates with an interesting concept that continues until the bitter end. Great cast and a stong storyline keep this drama/thriller from fizzing into boredom. The final 15 minutes are relentless and provide a lot of depth into a film that rewards the viewer as the puzzle unfolds. The ambiguous conclusion robs the film and I think we deserved a fitting end to the long time invested. I hope Zack Whedon gets a chance at Black Widow, the guy has a clear distinct eye for strong lead female characters. I found this on Netflix and ended up watching the entire film, it plays out like David Mamets Spartan which is another worthy film to view. 09-06-2017.

Come And Find Me Quotes