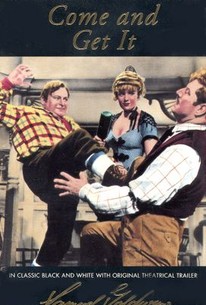 Come and Get It Photos

AKA Roaring Timber (reissue title) In the late 19th century, Barney Glasgow (Edward Arnold) is a brash, tough logger often at odds with the others who work with him in the Wisconsin forests near Iron Ridge. His best friend is Swan Bostrom (Walter Brennan), a big-hearted Swede. The ambitious Barney presents an idea that gets the attention of his boss, even when Barney suggests they become partners. At a boisterous tavern, Barney and Swan meet the cynical, opportunistic Lotta (Frances Farmer), but she and Barney quickly fall in love. However, his boss sends Barney a telegram that makes it clear their partnership depends on Barney marrying the boss' unattractive daughter, Emma Louise. Barney decides to take the offer, and leaves it to Swan to break the news to Lotta; she's so unhappy that the kind Swan proposes to her himself. Twenty-five years or so pass; Barney is now the richest man in the state, wealthy from timber and paper mill interests, and living in a fine house far from Iron Ridge. Little love is lost between Barney and his socially-conscious wife (Mary Nash). He's closer to his son Richard (Joel McCrea), though uninterested in Richard's ideas for marketing paper cups, and not entirely happy that his daughter Evvie (Andrea Leeds) is engaged to the scion of a wealthy family -- nor is Evvie herself really happy about this. Things undergo a major change when Barney gets a telegram from Swan, whom he hasn't seen in 20 years. Lotta died some time ago, and Swan is lonely for his old friend. Barney impulsively returns to Iron Ridge, where he's warmly greeted by Swan -- and astonished to learn that Swan's daughter, also called Lotta (also Farmer), is almost the double of her mother, though her temperament is very different. Barney is almost immediately smitten by the young Lotta, who is eager to get out of Iron Ridge and see more of the world. He takes her and some friends to Chicago, where he imagines that she is falling in love with him, too. However, when she meets Richard, Lotta is instead attracted to him, considering Barney just a nice -- and very generous -- man of her father's generation. Meanwhile, Evvie has become attracted to a "bohunk," Tony Schwerke (Frank Shields), who works in one of her father's factory. When Barney confronts the young man, he's impressed by his nerve and intelligence, and begins to think he might not make such a bad husband for his daughter. Things come to a head at the annual Employee Banquet, held as always on the Glasgow estate. Barney finds Lotta kissing Richard, and slaps his son -- who knocks his father to the floor. Now realizing what a fool he's made of himself, Barney is comforted by the understanding Swan. Barney gathers some of his old strength to ring the big triangle on the porch and announces the banquet has begun: "Come and get it!" Never as good as it keeps promising to be, "Come and Get It" was a troubled production from the beginning. Director Howard Hawks liked the first part of the story, as can be seen in his exuberant filming of an elaborate saloon brawl involving a lot of big metal trays flung around the room by Arnold, Farmer and Brennan. But he never warmed up to the more melodramatic second half of the film, and kept encountering interference from the very hands-on producer Samuel Goldwyn. Finally, after 40+ days of shooting, Hawks left the film; stories differ as to whether he quit or was fired, but he was replaced by a disgruntled William Wyler for the last 28 days of shooting. Neither director was satisfied with the result, and the movie was a box-office disappointment. Arnold is not well-cast in a role that called for a younger, more outdoorsy man, but his expansive personality does fit the older Barney reasonably well. Frances Farmer, in her first major film, is outstanding as both Lottas, especially the mother. And Brennan, often in Hawks' movies, won the Supporting Actor Oscar for his role as the good-hearted Swede. Viewers today are actually more likely to enjoy the film than the original audiences; this kind of big-scale melodrama is rarely attempted today, and the aroma of failure has long since evaporated. Also, Richard Rosson's logging footage, shot in Canada, Idaho and Wisconsin, is excellent, a view into a time long gone.

Critic Reviews for Come and Get It

Although there is nothing new in the theme, it has been simply and powerfully expressed by a number of admirable performances, and it has been played against an interesting background.

The first part of the film, the best, is unmistakably Hawks.

Stinging look at how big business exploits and destroys Nature.

Frances Farmer as the hardened beer-hall tart is beguilingly stylized

Botched melodrama that's based on the novel by Edna Ferber.

This melodrama, based on Edna Ferber's novel, is better known for its offscreen facts and scandals. It's a co-directed Oscar-winning film, which gives a rare opportunity to see the acting of Frances Farmer.

This drippy material was generally not the kind of stuff that suited Hawks, but he made the best of it with the film's spirited barroom brawls and a delightful scene in which McCrea and Farmer pull taffy together.

The film may not amount to much, but it's hard to deny the entertainment value of such an over-the-top storyline.

Audience Reviews for Come and Get It

This movie does have it's funny moments, but most of the time it's talky and boring.

Overlooked melodrama about a lumber tycoon who marries to further his career and abandons the woman he truly loves. Credible production is perhaps more fascinating for its behind-the-scenes shenanigans. Howard Hawks was fired by producer Samuel Goldwyn after directing the first half, and subsequently hired William Wyler to complete the film. This is reflected in the shifting storyline. Starts out as virile logging adventure then fades into an over plotted soap opera, all the while distinguished by solid performances. Character actor Edward Arnold stars as Barney Glasgow, the businessman determined to succeed. As both mother and daughter, troubled actress Frances Farmer is also worth watching in one of her rare film performances. Interestingly it was Walter Brennan who won the Oscar for Best Supporting Actor for his likable but unremarkable work as Glasgow's lifelong friend. Sweeping drama is also notable for the extraordinary logging sequences in the first half.

Come and Get It Quotes