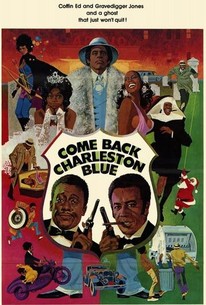 This sequel to Cotton Comes to Harlem (1970) brings back Coffin Ed Johnson (Raymond St. Jacques) and Gravedigger Jones (Godfrey Cambridge), two freewheeling African-American police detectives working the beat in Harlem. Joe (Peter DeAnda) is a famous photographer who has mounted a crusade to drive drug dealers out of Harlem, but his intentions are hardly civic-minded; he hopes that by cutting out as much competition as possible, he can take over the business and corner the neighborhood's dope market. Caspar (Maxwell Glanville), one of Harlem's biggest dealers, is the only one who has figured out Joe's angle, and he carefully guards his territory. When a few local dealers begin turning up dead, Joe announces that the ghost of a powerful Harlem gangster, Charleston Blue, has returned to clean up the neighborhood; the small-time dope men are a suspicious lot, and many of them flee the city. But Coffin Ed and Gravedigger know that something fishy is going on, and they struggle to get the goods on Joe and Caspar, as well as solving the mystery of Charleston Blue. Like its predecessor, Come Back Charleston Blue was based on a novel by crime writer Chester Himes. ~ Mark Deming, Rovi

Minnie Gentry
as Her Majesty

Ethel Ayler
as Matron at Ball

While it is a very good movie, it lacks some of the quality that made its predecessor [Cotton Comes to Harlem] so great.

This is not to say that Charleston is a bad movie. It's pretty good, actually. It's just that [Cotton Comes to Harlem] was such a milestone that by comparison Charleston comes out a pebble.

There are no featured reviews for Come Back, Charleston Blue at this time.