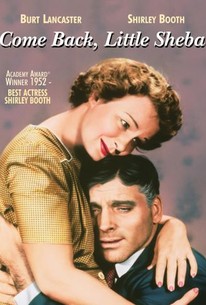 In the original Broadway production of this William Inge play, Shirley Booth played Lola Delaney, the vulgar, dumpy, less-than-bright "shotgun bride" of recovering alcoholic Doc Delaney, played on stage by Sidney Blackmer, who won a Tony award for his efforts. When time came to film the play, Shirley Booth was retained as Lola, but Burt Lancaster replaced Blackmer as Doc. Although Lancaster seems far too youthful for the role, the film is a fascinating and sometimes funny study of an unhappy marriage made unhappier by the arrival of a sexy stranger. Young Marie (Terry Moore) rents a room from Lola, a tiresome creature who never stops talking, especially about the "imminent" return of her runaway dog Sheba. Doc is having enough trouble staying away from the bottle and resigning himself to his marriage without the curvaceous Marie arousing his baser instincts. The characters interact with gloomy consequences, in the typical kitchen-sink-realism style of Inge's Fifties plays, although a tacked-on happy ending, common to Fifties movie melodramas, pretends otherwise.

Virginia Mullen
as Henrietta
View All

Come Back, Little Sheba is a faithful reproduction of the stage play, together with its assets and liabilities.

I won't go into the plot of Come Back, Little Sheba because I want you to see it for yourself.

Come Back, Little Sheba, Hal Wallis's high-priced entry for the Academy awards, is not so much a good picture about a dismal, twenty-year old marriage as a somewhat funny and touching play that someone failed to make into a movie.

In this adaptation of Inge's play, Daniel Mann, a specialist of melodramas, gets a good performance from Shirely Booth as a self-pitying housewife but a misguided one from Burt Lancaster.

Nothing comes alive at you. Nothing roots us to the Delaneys, and in turn nothing grounds them in any world except that of Inge's creaky schemata.

This is Booth's movie as was the Broadway production. Dynamic.

Shirley Booth gives a beautiful performance in this heart breaker, Burt Lancaster is also very fine in a portrait of a sad dance of need and devotion.

Burt Lancaster disappoints me sometimes but not here. Very similar in theme to Who's Afraid of Virgina Woolf but this one is memorable in its own right.