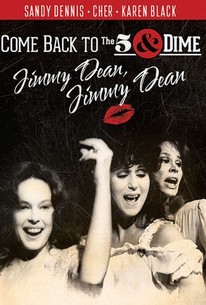 Come Back to the 5 & Dime Jimmy Dean, Jimmy Dean Photos

Robert Altman directed this low-budget film version of the play by Ed Graczyk, also directed by Altman on Broadway with the same cast. The film takes place in the small Texas town of McCarthy in 1975. Inside of a five-and-dime store, a reunion is planned for the members of a local 1950s James Dean fan club. An odd assortment of women arrive, revealing hidden secrets, as Altman flashes back, showing the women as young James Dean fans, and then jumps forward to present day to reveal the ravages of time and lost innocence. Among the women returning for the reunion is Mona (Sandy Dennis), a disturbed woman who, in the '50s, got a job as an extra on the Giant shoot and nine months later gave birth to a son, who she claims is James Dean's child. There is Sissy (Cher), a wisecracking waitress, and also Joanne (Karen Black), who holds a shocking secret that is revealed at the reunion. Besides the three main players, a collection of supporting characters maneuver around the periphery. They are Stella Mae (Kathy Bates), the wife of a rich petroleum executive; Edna Louise (Marta Heflin), a shy, withdrawn woman with numerous children; Juanita (Sudie Bond), the manager of the five-and-dime store; and Joe Qualley (Mark Patton), a young man who likes to dress up in women's clothing.

Critic Reviews for Come Back to the 5 & Dime Jimmy Dean, Jimmy Dean

We could make a number of conjectures about Altman's relationship to the cast of Come Back, but I do have to say it boasts one hell of an ensemble.

Seems to achieve an astonishing rebirth in the transposition of a play from stage to screen. It is also a rebirth for Robert Altman, who has fashioned a stirring comeback, revitalizing his technique and presumably his career.

An examination of memory and celebrity worship, Jimmy Dean is Graczyk's expert portrait of façade.

Unfortunately, it is a Whitman's sampler of every negative stereotype imaginable.

Dreamlike and bleakly real, fantastical and humorous, it sucks us into a vortex for two hours where all we care about is the lives of these characters.

Audience Reviews for Come Back to the 5 & Dime Jimmy Dean, Jimmy Dean

Unusual but with that cast always interesting

Come Back to the 5 & Dime Jimmy Dean, Jimmy Dean Quotes