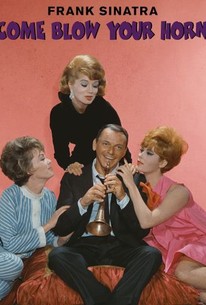 This comedy is based on Neil Simon's successful stage play. Alan (Frank Sinatra) is the oldest of two brothers from a Jewish family. When his younger brother decides it's time to leave home, Alan welcomes Buddy (Tony Bill) to his swinging, uptown bachelor pad. Buddy gets a new suit and a lesson on how to be a playboy from his older brother. Buddy soon gets with the program and steals several of Alan's girl friends. His affair with a married woman (Phyllis McGuire) results in a clobbering from her irate husband (Dan Blocker). Alan and Buddy's parents show up to extricate the youngest son from the wicked web of sin. The screenplay comes from Norman Lear, who directed along with Bud Yorkin. Dean Martin makes a comical cameo as a bum, and Sinatra croons the title track. Lear wouldlater make television history with such shows as "All In The Family", the American version of Britain's "Till Death Do Us Part."

Dean Martin
as The Bum

The laughs, in my own experience, are meagre rather than abundant in this "Jewish family" comedy starring Frank Sinatra as a not-quitc-fortyish bachelor who coaches his adolescent brother in the folkways of a playboy's life.

... like a cartoonish fantasy of the Mad Men sensibility of philandering men who treat the female sex as a buffet for their perusal.

The situations are predicable, the gags reminiscent, but the whole is carried forward at a jaunty pace and in high spirits.

There are no featured audience reviews yet. Click the link below to see what others say about Come Blow Your Horn!