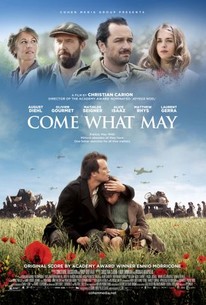 Come What May Videos

Come What May Photos

May 1940. To escape the German invasion, the inhabitants of a small village in the north of France take to the road, like millions of other French people. On this exodus, the villagers take with them a German child, whose father opposed the Nazi regime and who has been jailed in Arras for lying about his nationality. During the chaos, the father is freed and sets out to find his son, accompanied by a Scottish soldier who is trying to get back to England.

Critic Reviews for Come What May

With its old-fashioned gloss, the incident-packed story proves only mildly engaging and finally has little to say.

The plight of wartime refugees has rarely if ever looked so picture-postcard perfect as it does in this well-intentioned but ultimately plodding and far too painterly period melodrama.

"Come What May" is a paint-by-numbers account of a real-life World War II event, the displacement of eight million people from their homes in France.

If you ever wanted to see a wartime movie that feels directed by a kinder, gentler Michael Bay, Come What May is right up your alley.

There's nothing excessively imaginative or distinguished about the film, but it has some of the solid narrative pleasures of a good, old-fashioned Hollywood war epic.

There's nothing more to it than meets the eye. Its lessons about cooperation and everyone fulfilling roles in the group according to their own strengths are high school essay basic.

As far as war movies go, Come What May plays it safe, a melodrama which prizes the picturesque over the grotesque, and often to its own narrative detriment.

[It] is a very sincere historical film about an overlooked aspect of WWII, well-directed and beautifully shot with some nice acting and moving scenes, if a rather conventional dramatic film overall.

Takes the view that war is hell.

The film did need a steadier hand on the helm.

Come What May is not a typical, action-filled war movie. Instead, writer/director Christian Carion presents the audience with a refreshing drama that intimately details characters' lives at the start of the German invasion.

Audience Reviews for Come What May

There are no featured audience reviews yet. Click the link below to see what others say about Come What May!

Come What May Quotes