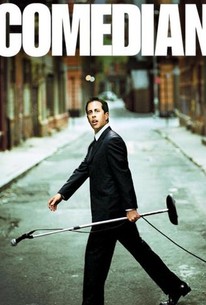 Critics Consensus: Comedian is an insightful look at the hard work of creating comedy.

Critics Consensus: Comedian is an insightful look at the hard work of creating comedy.

Critic Consensus: Comedian is an insightful look at the hard work of creating comedy.

An inside view of the post-Seinfeld life of Jerry Seinfeld. Neither a concert film, nor a biographical documentary, film examines the birth of a comedy act and offers a window into the details of backstage life and the challenge of making people laugh. Seinfeld is revealed in ways no one has seen before: struggling with difficult material; confronting self-doubt; accepting the help of friends and colleagues, simply as another comedian trying to put together an act. On stage, Seinfeld talks about marriage, recalls his time as the country's most eligible bachelor and offers new perspectives on the observations of the every day. But it is off-stage - where he shares the struggle with other comics including Colin Quinn, Chris Rock, Gary Shandling and Jay Leno -that a more personal, alternately funny and surprising, portrait emerges.

Colin Quinn
as Himself

Chris Rock
as Himself

Kevin Nealon
as Himself

Jerry Seinfeld
as Himself

Like watching a Polaroid picture develop without ever getting to see the finished picture.

What it does well is place viewers at the heart of the frustration of failure, of the silence during pre-show strolls to get one's mind focused, of the genesis of a promising joke.

Charles did a great job of catching Seinfeld with his guard down, or what passes for unguarded for this most guarded of celebrities.

Seinfeld, dogged by self-doubt and clearly struggling at times, comes up with some fairly funny material.

What begins as an indulgent vanity piece (Seinfeld was a producer of the film) ends up as a fascinating portrait of creativity at its most compulsive.

I wanted more jokes. But I'm never tired of watching the star.

This is not a comedy concert film, it's about the hard work of creating comedy, about the glare of the spotlight, about the rush of a good performance, and the heartsink of comic meltdown on stage.

An honest, engrossing documentary about what it's really like to be a stand-up comic.

It's both endlessly intriguing and side-splittingly funny.

Think sausage. It's gristly, filled with fat, and even if you like standup comedy, you might not want to see it done.

An interesting look to the obsession, tension, hard work and sadness behind the comedy.

Comedian follows two comics and up-in comer (Orny Adams) and a veteran (Jerry Seinfield) Both entertaining and a slap in the face for anyone who thinks after a hit sitcom you can just go back on stage and kill using your presence. Just not the truth, If I can paraphrase Steve Martin stand-up comedy is the single most difficult thing in show business because every other aspect of show business you can hide behind something so the audience doesn't see you wether it's a camera or a script. With stand-up your audience is right in front of you. It's a real no holds barred business. Lot's of great cameos keep this film from being a pbs special. A new favorite documedy of mine.

An interesting look at the trials and tribulations of a comic trying to develop a new routine. Obviously Seinfeld gets a lot of slack as there was a whole bunch of bad material that was applauded. If only I had such luck.

A great peek into the world of the Stand up.