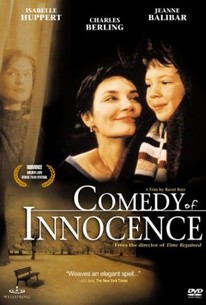 A woman begins to wonder if her young son is who she thinks he is in this psychological suspense story. Ariane and Pierre (Isabelle Huppert and Denis Podalydes) are the busy parents of a nine-year-old son, Camille (Nils Hugon). Camille feels neglected by his hard-working mom and dad and often seems to drift into a world of his own, preferring his imaginary friends to other children or his nanny Helene (Laure de Clermont-Tonnerre). One day, Camille startles Ariane by announcing he wants to live with his real mother -- and proceeds to lead her to an apartment across town, where Ariane is introduced to a stranger named Isabella (Jeanne Balibar). Camille seems to know all the nooks and crannies of Isabella's flat, and the latter insists that he is her lost son Paul, who actually drowned two years ago. Unsure of what to do, Ariane decides to play along, going so far as to allow Isabella to stay in the family's home as she tries to resolve Camille's dilemma with the help of her brother Serge (Charles Berling), a psychiatrist. Comedie de L'Innocence is based on a novel by Massimo Bontempelli and was directed by acclaimed Chilean filmmaker Raul Ruiz. ~ Mark Deming, Rovi

The stilted style of the drama is meant to reflect the dreamlike quality of the story, but it makes the film painfully slow-moving, even by French standards.

It's all fizzle and no punch.

[font=Century Gothic]In "Comedy of Innocence," Camille(Nils Hugon) is a normal nine-year old boy obsessed with his video camera who celebrates his birthday with his parents Ariane(Isabelle Huppert) and Pierre(Denis Podalydes) and Uncle Serge(Charles Berling), a psychiatrist. The next day, he claims his name is Paul and addresses his mom by her first name. Even weirder, he leads her to an apartment where he has never been before. It is there that Isabella (Jeanne Balibar), a violin teacher, lives. Two years previously, her son Paul drowned.[/font] [font=Century Gothic][/font] [font=Century Gothic]For the most part, "Comedy of Innocence" is a suitably creepy movie about motherhood and loss with an unsettling atmosphere and a great cast. However, there is a perfunctory resolution to a mysterious puzzle and a cool setup never fully lives up to its promise.[/font]