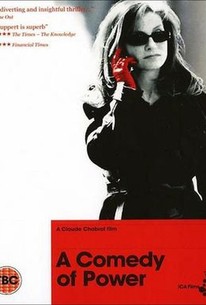 Critics Consensus: Light on laughs -- and character detail -- Comedy of Power is nonetheless a timely thriller that unites Claude Chabrol and Isabelle Huppert to diverting effect.

Critics Consensus: Light on laughs -- and character detail -- Comedy of Power is nonetheless a timely thriller that unites Claude Chabrol and Isabelle Huppert to diverting effect.

Critic Consensus: Light on laughs -- and character detail -- Comedy of Power is nonetheless a timely thriller that unites Claude Chabrol and Isabelle Huppert to diverting effect.

Claude Chabrol's Comedy of Power stars Isabelle Huppert as a French judge who attempts to bring down the very powerful but corrupt CEO of a large corporation. As she digs deeper into the case, she uncovers criminal activity that stretches into the highest levels of government, and her life is turned upside down by death threats as well as her sudden celebrity. The film follows as her career affects her family. Loosely based on real events, Comedy of Power had its North American debut at the 2006 Tribeca Film Festival.

Yves Verhoeven
as The Court Clerk

Dominique Daguier
as Stranger No.2

Raphael Neal
as Stranger No.1

John Arnold
as Jaguar Man No.1

Michel Scourneau
as Jaguar Man No.2

Jean-Marie Winling
as Man in Power

Critic Reviews for Comedy of Power

Drawing on the real-life prosecution of a recent scandal, Chabrol, a former law student, seems to be having more fun with a film than he's had in years, and it's contagious.

A sleek, hand-tooled, extremely sophisticated package, A Comedy Of Power is a very grown-up entertainment that artfully walks a line between moral comedy and political thriller.

The film constantly plays out within the borders of a perfectly traceable reality, overwhelming it with an absolutely rigorous mise-en-scèn

Very little happens, and it has the look of a TV movie; yet the pace never seems to let up, the screen never seems empty, and its grip on your attention doesn't falter.

The script is dapper and the story slick. But it is Huppert who gives it heft, style and star power.

The film is at its best in its portraits of the politicians and company officials, exemplary representatives of the French bourgeoisie and nouveau riche.

[Chabrol's] untypically slow-burning drama is conspicuously short on narrative tension, and certainly not as tightly wound as his finest thrillers. But it is engrossing nonetheless, benefiting from a strong cast and the sting in its tale.

Chabrol's observations are subtle, and Huppert is always a strong presence, so the film is easy to watch.

Though it sags a little in the middle, this film never gets boring. It's a slow but gripping thriller and the credit for that goes mainly to Ms Huppert.

Despite the title, there's no laugh-out-loud comedy in this mostly serious thriller.

With Isabelle Huppert holding court and irresistibly dominating the proceedings, this is never really about the crimes she investigates - but it probably should have been, as the film, for all the quality of its performances, is a trial for the viewer.

Audience Reviews for Comedy of Power

slow moving french film about the machinery of capitalism and one woman's determination to put a dent in the inherent corruption that lies within. Terrific acting by Huppert and Berland, but otherwise one soon realizes the futility of her struggle and the movie seems to slow down rather quickly, almost to a halt toward the end. Its an ok watch for the acting though.

[font=Century Gothic]In "The Comedy of Power", Jeanne Charmant-Kilman(Isabelle Huppert), a judge investigating corruption, orchestrates the arrest of Humeau(Francois Berleand), a high-ranking official, and hopes to sweat the names of his cohorts out of him. But they are not that concerned, thinking that attention will be focused solely on him. On the home front, her husband, Philippe(Robin Renucci), a doctor, is less than supportive of her, while his nephew, Felix(Thomas Chabrol), shows up, looking for a place to crash.[/font] [font=Century Gothic][/font] [font=Century Gothic]"The Comedy of Power" is directed by Claude Chabrol in his usual matter-of-fact style. Ostensibly a legal procedural, the movie pays less attention to the facts of the case than to the characters involved. Through Isabelle Huppert's relaxed performance, it becomes clear that her character is doing something that she enjoys and is glad that she can make a difference by attacking corruption and breaking down the old boy network. By contrast, her husband has almost the opposite feelings about his job.[/font]