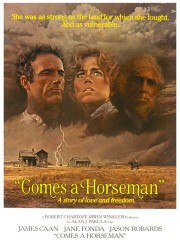 Brian M
½ December 16, 2018
Fonda at times overwrought,Caan not really sure what he's doing but stays with it!

Lee M
½ August 8, 2017
Tries a bit too hard to become monumental in the manner of a John Ford metaphorical Western.

Harry W
September 20, 2014
Comes a Horseman succeeds because it's a western not about the west, but about the people coming to terms with the changing western civilisation in a strongly character driven story.
It achieves this through its western medium of storytelling, which allows it to mirror the western style through use of stylish atmosphere as created by the excellent scaled cinematography and fine editing, with the addition of a wonderful musical score. Visually, Comes a Horseman is excellent for these purposes amongst others.
The others are the wonderful locations Comes a Horseman is filmed on which are rich with colour in a sepia manner, making it bright and yet dull to reflect the life of the world the characters live in as well as the underdevelopment of the society in comparison to more city-based social norms. It's a cleverly stylish tale, and somewhat symbolic in the right manner, and so Comes a Horseman is easy to remember as being a beautifully shot film and one of the memorable westerns that tackles ranch life of a real cowboy or cowgirl, as opposed to a tale relating to the basis of the myth of who the cowboy really is and what he represents. Comes a Horseman brings the spirit of the cowboy back and gives the values to a female character played by Jane Fonda who has no issue understanding and conveying them throughout this western dramatic.
Neither does James Caan who without fear manages to step into the role of Frank "Buck" Athearn and matches Jane Fonda's screen presence without overshadowing her, making them a good dual role for the screen with fine chemistry. They are a strong duo of cowboys, even with Jane Fonda being a female. Maybe it takes an understanding of what a cowboy actually is to appreciate it and understand what I mean, but that's what makes Comes a Horseman a western worth seeing.
Richard Farnsworth flawlessly steps up from a career of being nothing but an extra or an uncredited stuntman into the important role of an actor, and he takes the opportunity by storm to show off all that he has had brewing inside him for so many years as his passion for acting has clearly burned. He is an absolute natural as an actor, and he stands out in screen even against the two time Academy Award winners Jason Robards and Jane Fonda who actually won her second Oscar that year, as well as nominee James Caan. Richard Farnsworth just supplies a certain sense of friendliness and wisdom to his role, and he's just great. His Academy Award nomination is well deserved.
And as usual, Jason Robards is a great villain through his ability to manipulate words.

So although it's a slow paced story and is more of a character driven western than one focused on shootouts and horse chases, Alan J. Pakula's fine direction, great performances and beautiful scenery make Comes a Horseman a memorable film.

Allan C
June 22, 2012
Beautifully photographed western with many terrific performances is marred by it also being so stridently low-key to the point that the film feels like nothing is happening. Still, if you like the actors involved or are a fan of westerns about folks still living the cowboy life after time has moved on without them, this film is worth watching.

Riley H
½ November 25, 2010
Overall this is pretty decent. But that score is attrocius: like the movie was made in the 50s and the audience needed cues on how to feel. Without the score it would have been significantly better.

Pavan R
September 5, 2010
Entertaining Western with some romance..action..thrill..everything which makes a movie enjoyable..Fonda and Caan are superb as usual !!

Andy J
October 7, 2009
Leisurely-paced like no films are anymore, this is a solid, entertaining western about the changing landscape and values post-WWII. Its fun watching Jason Robards sink his teeth into a very sinister role, and Richard Farnsworth (in an Oscar-nominated role) is excellent as a supporting character. Another solid addition to 1970s cinema.

July 5, 2009
I will NOT see a Movie that has this Commie, Traitor, BITCH in it.
They don't have a LOW enough rating for her.
She can rot in the Hanoi Hilton, for what she did to Our troops during Vietnam.

Knut D
½ June 14, 2009
A totally overlooked 1970s western/drama from Alan J. Pakula. This is a tender and moving love story with fine performances by the entire cast. This has to be Jane Fonda's finest work and Richard Farnworth's suporting role is outstanding. His performance is so heartfelt. A bittersweet western well worth seeking out.

Jan D
½ June 13, 2009
Slow paced and heartfelt western by "All the President's Men" director Alan J. Pakula. The cinematography is stunning and the cast is excellent, especially Richard Farnsworth.

Private U
½ January 29, 2008
This is one of the most overlooked westerns in American cinematic history. Subtle and beguiling, the performance of "Dodger" by Richard Farnsworth is the best supporting-actor role EVER!
Page 1 of 2