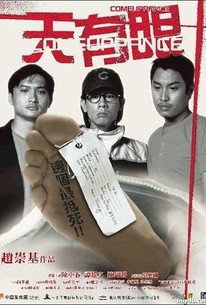 When an otherwise quiet man takes the law into his own hands, he sets off an unexpected chain of events in this action comedy from Hong Kong. Sung (Patrick Tam) works in a photo processing lab and generally keeps to himself, but when Sung spots a group of notorious gangsters dining in a restaurant one evening, he uncharacteristically decides to do something about the law-breakers, slipping some poison into their food. The gangsters drop dead, and Sung decides he rather likes dishing out justice; after a few similar incidents, Sung's adventures attract the attention of Hak (Jordan Chan), a yellow journalist who paints a picture of Sung as a fearless vigilante. Hak's stories make Sung out to be a much greater threat to Hong Kong's criminal element than he actually is, but the leader of the nation's criminal underworld (Wu Hsing-kuo) doesn't know that, and soon police detective Michael (Sunny Chan) teams up with Hak to find Sung before the crooks can put him six feet under.

There are no critic reviews yet for Tian you yan (Comeuppance). Keep checking Rotten Tomatoes for updates!

There are no featured reviews for Tian you yan (Comeuppance) at this time.