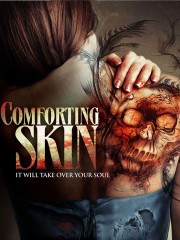 Brian C
½ September 26, 2016
Excellent character piece of a insecure and depressed woman trying to boost her self-esteem by getting a tattoo. However, over time the tattoo develops a voice of its own and starts influencing her down a very dark path.

The acting is really good, especially the lady who plays Koffie. The other supporting actors were hit and miss depending on their scene.

This story is very sad but relatable; her descent into madness was very well done.

Cindi R
September 18, 2016
Zero stars! This is a total waste of time and makes no sense. My husband talked me into watching this and I wish I had listened to my gut. Not worth the time it took to write this review. That's how awful it is.

Mandi R
½ April 2, 2016
This film is really strange and demented in a Black Swan kind of way. Really well executed in my opinion. The main girl reminds me of a distressed Lena Dunham.

The acting was well done. The entire time I kept thinking "what a b*tch this tattoo personality is." You'd think an imaginary friend would be nice...but no. Ironic title considering her tattoo's personality was constantly bossing her around and putting her down all the time....not so comforting.

I highly recommend to anyone who enjoys a good slow burning psychological thriller.

Jake P
½ September 18, 2015
Never even got halfway through the movie, fast forward to the end to see what happened. For a movie who has a main character named Coffee, this is so weird

Michael F
August 7, 2015
This film takes itself way too seriously. It has such a silly premise, some humor would have been nice, but instead you get a really dark and depressing story of a woman in a downward spiral

Joshua L
April 19, 2015
It had potential and a nice tone of music but the movie sucks.

Andy G
February 8, 2015
Comforting skin is an OK strange movie about this lonely girl that cant find a boyfriend so she gets tattoo that comforter her and drives are crazy. C+
(2014)

Lee M
January 1, 2015
Many of the ideas here are quite interesting and the aesthetic and production value are quite impressive considering the budget, but this works more as a talent reel for a gifted actress and a director that might fare better with some else's script.

The first half-hour or thereabouts of Comforting Skin is annoying in the extreme. It feels like it's going to be just another mumblecore movie (not even a mumblegore movie because, you know, no violence). You know the drill. Annoying characters you can't stand doing things they couldn't afford in the real world without anything much really going on around them. And then Koffie (Good Luck Chuck's Victoria Bidewell), our main character, gets her tattoo. And everything changes.

At the beginning, Koffie, co-worker Synthia (MVP: Most Valuable Primate's Jane Sowerby), and best-friend-who-Koffie-kind-of-wants-to-date-but-not-really Nathan (Road to Nowhere's Tygh Runyan) are exactly those people you loathe in the movies. Koffie and Synthia drink at the restaurant they both hate working at (they keep working there because, presumably, they can drink free-they certainly can't afford the amount of alcohol they consume on tips), have endless conversations about life, try to decide whether Nathan's hot or not, discuss Synthia's parade of sugar daddies, you get the idea. Those of you who give up on the movie and turn it off during this section are missing out, though. Koffie, feeling insecure, gets a tattoo because she thinks it'll make her look sexy/mysterious/more attractive. And then it starts whispering to her.

NOTE: the rest of this review will reveal, and then talk about, the major spoiler for the film. While you may well have guessed it from the brief synopsis above, if you are sensitive to that sort of thing and plan on seeing the film (you should), stop reading now.

The final hour and change of Comforting Skin is as perfect a depiction of Koffie's descent into delusional anxiety and depression as one could ask for. I speak from experience; I was in the exact place Koffie ends up in the climax of this film a little less than seven months ago. So when I tell you that Franson (who also wrote) knows his stuff, well, it's fresh in my mind, delusions and all. The longer that section of the movie went, the more I could identify with her. While it doesn't allow me to excuse how shallow and horrible a person Koffie is during the first half-hour of the movie, it makes it a little more understandable, and you can put the first bit down to debut-film jitters. Especially since the rest of the movie belies the first part by making it hard to believe this is a first film. Franson seems to go from not knowing where to put a camera, and certainly having no clue when to cut a scene or to stop with the repetition of a theme, to being the guy who gets pace, tension, and the small, subtle points of perfect movie characterization better than at least half the big-name filmmakers working in Hollywood today. If only any character in Interstellar had been half as complex and realistic as Koffie in the last hour of Comforting Skin, it would have been the great film it thought it was.

The dark side of getting it that right is, well, you get it that right. A lot of the last hour of this movie is going to be very awkward to sit through if you're normal. (To be fair, it's just as awkward if you get it, but at least you can vouch for its veracity.) And while I understand where Franson was going in one particular scene-without it being a major spoiler for one character, a lot of people had the same problem with Eric England going there in Contracted, though he knew what he was doing more-he may have been setting himself up for a lot of righteous anger from some people who will see that scene as marginalizing. Take it as you will; be warned you might be offended by it. Me, I was riveted to the screen the entire last hour of the film. Your mileage may vary. *** 1/2

Super Reviewer
Jesse O
November 23, 2014
Essentially, since this doesn't even have a description on here, this film is about a very insecure woman, Koffie, who gets a tattoo in order to boost her confidence. Things start to get strange once the tattoo starts to take over Koffie's body and mind. Seeing that Koffie longs to be loved and needed by someone she, very clearly, becomes obsessed with her tattoo. Descending deeper into the rabbit hole, Koffie cuts off ties with those closest to her in order to satisfy the tattoo's wants and needs. Clearly this movie is a drama about schizophrenia framed as a horror film and it's a good one at that. Koffie is a sympathetic character in that it's obvious that she's had some fucked up things happened to her, most of them alluded to but never explicitly stated. But she also comes on a little strong, she comes across as incredibly needy and desperate at times, which makes it understandable why her ex wants nothing to do with her anymore. She's got some severe mental issues at work here. The tattoo offers her something that she simply could not attain with other people and she, obviously, gravitates towards that, eventually becoming obsessed and shutting everyone else out to live in her own little fantasy world. So the story was at more than solid. I think the acting, the pacing, and the audio are a little inconsistent. Overall the acting is good, but there are just times when it feels a little off. The pacing is what it is, it feels longer than what it actually is. And the audio, particularly when characters are screaming or raising their voices, is absolutely horrendous, just terrible. It's obvious that this film was a low-budget production, but it made the most out of what it had, thanks to some solid cinematography. The only instances were you notice how cheap it is is during the parts where the audio is just way too loud and it sounds terrible. Like they used a $5 boom mic. Those are really my only complaints about the film, to be honest. This is definitely more of an acquired state, since it's not exactly a horror movie in the traditional sense. But if you want a psychological slow-burner then this will be right up your alley. It's obviously not the best of its kind that you will ever see, but it will get the job done.

John W
½ November 11, 2014
Dark and discomfiting and shot with gritty and beautiful visuals, but it's not for everyone. There is a definite target demographic for this film and I honestly can't see it appealing to a deep vertical.

Bill R
November 9, 2014
This movie is hard to place in any one genre. it jumps the genres like crazy but does it well to where it doesn't feel like a mess of a film. it is really well acted by the lead and when things start to take hold, it's hard to tell what is really going on. normally that would pass me off but it was done well enough to keep me interested and wonder all the way through. It's title is interesting because there are definite moments of uncomfortable-ness. A slower watch and not for everyone but good none the less.