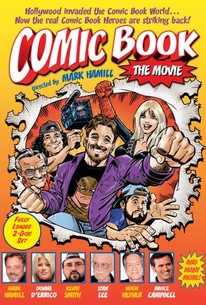 What Hamill and crew do with Comic Book: The Movie is take the documentary format...and flip it over in a satirical manner

Say what you will about the various types of fanboys out there, but one thing seems fairly certain: the geeks do know how to laugh at themselves.

a quickie and low-budget affair

Comic Book reminded me of a DVD bonus item that might be included with a disc's main attraction to help sell the feature.

This movie was a very clever concept. Mark Hamill makes a monument to his own nerdom and peoples it with his voice actor buddies. Okay, that makes it sound bad, but it really is very good and funny. Hamill creates a non-existent comic book character through which to examine the culture of comic collection and fandom. Jess Harnell and Kevin Smith are particularly good, and Smith is extra funny if you've seen his Evening With series. Heaps of talent brought this movie into being, and it really shows.

Silly and poorly acted. Fun for comic fans I guess and you get to see a little bit of comic con.

A few parts aside, this really sucked. Hamill was so annoying.

What the fuck was this load of crap really about. Just a bunch of voice over actors trying to feel important.