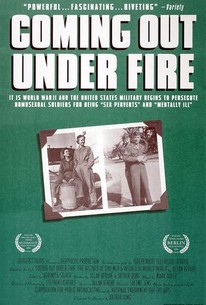 Coming Out Under Fire Photos

Innumerable homosexual men and women served honorably (and unnoticed) in the armed forces of the United States during World War II, while a great many others were swept up in anti-homosexual dragnets and entrapment schemes. This documentary interviews survivors of both kinds, and shows how it required tremendous courage and determination to cope with the society they found themselves in. Among the highlights are revelations of the ways these individuals had for identifying each other more or less safely, and the efforts many took to ensure that they would be able to serve their country in its time of need, despite the dangers of stigmatization or worse. The documentary is framed by the 1993 U.S. congressional hearings which resulted in the so-called "don't ask, don't tell" policy toward gays in the armed services, a policy which was calculated to please no one and which was predicted to be a failure before it ever began, opening the gates once more on service-wide anti-homosexual entrapment schemes.

Critic Reviews for Coming Out Under Fire

A reminder of a time when psychiatrists viewed homosexuals as mentally ill and the military viewed them as dangerous to morale, not to mention morality.

Coming Out Under Fire is a fascinating and poignant look at how the ban affected seven lives.

[Many] personal testimonies are skillfully woven into an absorbing portrait of 1940's military life that brings in Army training films, newsreels and period documents.

Dong's significant docu contributes to the debate of gays and lesbians in the military by viewing the issue from vantage personal and historical perspectives, focusing on some undaunted homosexual soldiers who had served in WWII.

Coming Out Under Fire, apart from providing an oral document, is a movie with a point to make about the ongoing mistreatment of gays in the military.

Arthur Dong's documentary, consisting primarily of talking-head interviews with a wide range of WWII veterans, confronts the issue in a commendably thoughtful and straightforward manner.

This informative and intelligent work provides a comprehensive historical context for the debates stirred up by Clinton's efforts to allow gay men and women to serve in the armed forces.

The result is that, despite the volatility of its subject, the movie feels stodgier and less pointed than it might have.

Audience Reviews for Coming Out Under Fire

There are no featured audience reviews yet. Click the link below to see what others say about Coming Out Under Fire!

Coming Out Under Fire Quotes