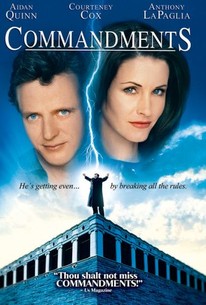 In this dark comedy, Seth Warner (Aidan Quinn) is a good man having a run of bad luck. His pregnant wife disappeared in the ocean during a trip to the beach, a tornado destroyed his house while leaving everything else in the neighborhood untouched, his boss fired him, and he was struck by a bolt of lightning that also injured his dog. While recovering in the hospital, Seth comes to the conclusion that God has cursed him. His brother-in-law Harry (Anthony LaPaglia) thinks that this conclusion is absurd -- after all, Harry reasons, he violates five or six commandments every day before lunch, and things are just great with him. This notion puts a bug in Seth's ear, and when he gets out of the hospital, he decides to confront God by deliberately violating all ten commandments; he hopes to start by seducing Harry's wife, Rachel (Courteney Cox).

Quinn is excellent as Seth. He's smart, he's sexy, and he lends a special spirit to his square-off with the Lord.

This is one strange movie; it's as if When Harry Met Sally... was directed by Ingmar Bergman.

This big-city spiritual fantasy makes for a plodding 87 minutes -- though maybe 8.7 of the minutes have something original on their mind.

Tries to go both ways with the material, mining the plot for laughs and profound existential drama, but nothing gels on either level.

I watched this film expecting not to like it, but watched it anyways because a friend recommended it. It turned out to be surprisingly charming.