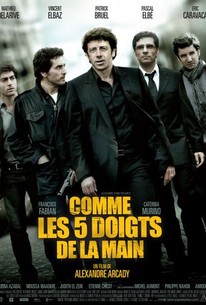 This intense French action saga concerns a group of five closely-knit but very different brothers, raised by a mother who grew too old too quickly, their father long dead. One spent years geographically separated from the family, but suddenly reappears under unusual circumstances, pursued by a gang of drug traffickers. He hides out among the others and reveals a secret unbeknownst to any of them. Now aware that their father was violently assassinated, the men band together and make a pact to avenge the patriarch's death.

There are no critic reviews yet for Comme les cinq doigts de la main. Keep checking Rotten Tomatoes for updates!

There are no featured reviews for Comme les cinq doigts de la main at this time.