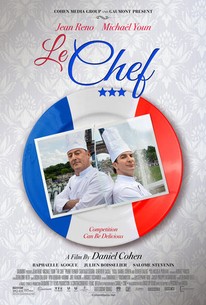 Self-taught aspiring chef Jacky (Michaël Youn) has the talent, but not the luck. Star chef Alexandre Lagarde (Jean Reno) is in danger of losing his reputation, along with his beloved restaurant. Fate brings the two together and helps them along a journey through the intoxicating world of French haute-cuisine. A legend in his own time, Lagarde is in serious conflict with Stanislas Matter (Julien Boisselier), the new CEO of the group that owns his restaurant, Cargo Lagarde. Matter is plotting to destroy Lagarde's reputation so that he'll have grounds to fire Lagarde and move the restaurant away from Lagarde's classic French cuisine towards trendy molecular gastronomy. Desperate to cling to his status as a Three Star chef (a rarity in the world of fine dining), Lagarde teams up with Jacky and together they try to find the balance between tradition and trend, as well as between family life and food obsession. (C) Cohen Media

Santiago Segura
as Juan
View All

About as exciting as the PBJ and flat diet soda I just had for lunch.

The film's payoff is about as novel as a scoop of lemon sorbet.

An amusing soufflé of a comedy that pokes fun at foodies while honoring the art of those who cook for them.

It's meant to be a soufflé-light charmer, but the bland, predictable French comedy Le Chef basically falls flat.

Le Chef isn't breaking any cinematic barriers here, but sometimes leaving the theatre with a smile on your face is haut satisfaction enough.

Very light French foodie comedy, seasoned with a touch of romance, that never quite boils over into farce.

Le Chef is a withered dribble of a tale, and you'll leave the theater hungry for something of substance.

With characters' motivations so lazily sketched in the script, they're given no opportunities to really fall into a groove.

There's very little to tax or surprise the viewer, but it's a fun swipe at those who take their food too seriously.

If you laugh, Le Chef is working. If you cringe, it's best to walk out and request a refund.

A cinematic meal that goes down fairly easily, but isn't tasty enough to be memorable.

As insubstantial and flavorless as one of the newfangled molecular dishes that Lagarde so vehemently despises.

Despite a light, breezy tone and a likable cast, this film doesn't really amount to much outside of some empty and hollow storytelling, with one incredibly racist scene.Â  It's a movie that hopes its breezy and light atmosphere will more than make up for its deficiencies.Â  It doesn't, that can only take you so far when you have a script as empty as this one.Â  You can just FEEL the director struggling to maintain a consistent tone.Â  There's no sense of direction, no sense of importance.Â  It lacked a focus that would've made the film, even as thinly scripted as it is, a little better.Â  You just don't get a sense of where things are heading.Â  That's good for a more artsy and experimental film.Â  Not so much when you're watching a lighthearted French comedy.Â  I still think the film has an idyllic French setting and I love France, so it makes it a little more tolerable.Â  It doesn't actually affect the film's quality one way or the other, but it's still a highlight nonetheless, even if they couldn't help the fact that France is a beautiful country.Â  The cast, as mentioned, is solid enough.Â  Not Little Miss Sunshine's cast, but serviceable enough.Â  This does lack decent laughs though.Â  They try hard, but most of the jokes simply do not hit.Â  Another positive is the fact that it moves at a rapid pace, it's over and done with in 80 minutes.Â  When you have a movie as lacking as this, then it's probably a good idea to keep it as short as possible.Â  This isn't an awful movie, by any means.Â  It is incompetently made, but it's not dreadful.Â  It's still no good.Â  If you want to see a movie about chefs, then you should watch Jon Favreau's great Chef. Yes, very creative title. That will satisfy all you foodies out there. This film, however, is past its expiration date.