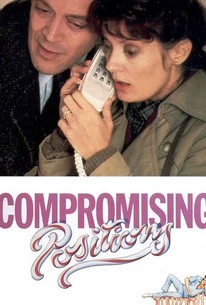 Director Frank Perry brings Susan Issacs' comedic whodunit novel to the screen with Susan Sarandon as a Long Island housewife who tries to escape her deadening suburban life by trying to solve the murder of a philandering local dentist. The dentist, Bruce Fleckstein (Joe Mantegna), is the kind of swinging ladies' man who wears gold chains and jazzy clothing. He also arranges to meet his lonely housewife patients in hotel rooms for afternoon quickies. When he is found murdered in his office, the suspects are as numerous as the names in the Nyack telephone directory, especially since Fleckstein had the habit of taking incriminating Polaroid snapshots during his one-on-one sessions. Judith Singer (Sarandon) is an ex-Newsday reporter and bored wife of Bob Singer (Edward Herrmann), a stuffy business executive, and she was one of the last people to see Fleckstein alive. Considered a suspect by police detective David Suarez (Raul Julia), she determines to solve the case herself, interviewing suspects and searching for evidence. If she solves the crime, Judith hopes to write an article about it and get her old job back at the newspaper.

A silly little whodunnit that's a mild embarrassment to all involved.

It's all very humorous and engaging, if only for proving that American whodunits don't have to have car chases and brutality; and it has a wicked eye for the vacuity of middle-class good life and what it may conceal.

A very mixed bag, but those who've missed a storytelling sense in American movies might want to have a look.

The movie has such a bitter core, such a distaste for its characters, that I ended up feeling uncomfortable in its company.

I only know that I found this lightweight mystery movie surprisingly thought-provoking.

A lightweight but most enjoyable comedy-mystery.

Frank Perry's lackadaisical direction hobbles the forward movement of the story and keeps it from being a funny as it could be.

For the most part this is a sharp, funny black comedy crossed with a mildly suspenseful whodunnit, although its reliance on truly dislikeable characters with more money than sense lets it down somewhat.

There are no featured audience reviews yet. Click the link below to see what others say about Compromising Positions!