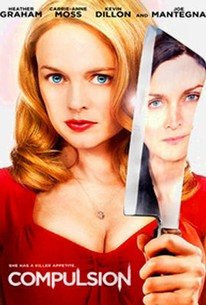 Compulsion is a psychological thriller starring Heather Graham and Carrie-Anne Moss as two women with dark pasts who live in apartments across from one another. Both suffer from various degrees of obsessive disorders and live in slightly skewed worlds of their own making. With images of sumptuous food and sensual enjoyment, the film explores the intimacy between the two through their connection with food, eating disorders and sex. In a battle of wills, one woman overflows with illusions and fearlessly faces life while the other withdraws from everything and fearlessly faces death. (c) Phase 4

At the very least, Compulsion is easy to watch, even if doesn't ultimately come together as the shocker Coccimiglio imagines it to be.

A slow moving thriller that doesn't quite fill you up!

Wanted to see this one for a while. Quite a twisted storyline. Liked it, but it does move slowly and not entirely sure it was worthwhile sitting through. Not one to rewatch, but to see once, not bad. I liked the colours and the outfits Heather wears - visually it is striking. What doesn't quite work is the ending. I don't mind twisted, but this just rang totally untrue. Also some of the sex scenes were over the top and just seemed there to titalate.

Heather Graham and Carrie-Anne Moss star in the dark comedy Compulsion. The story follows an aspiring cooking show host named Amy who attempts to befriend her next door neighbor Saffron with her culinary skills, but Saffron proves to be difficult, forcing Amy to take extreme measures. Graham's performance is pretty good, especially at giving a sinister edge to the character. However, Moss is bland, as is the rest of the cast. And the ending comes out of nowhere; as the plot appears to skip a few steps in order to get to a shocking conclusion. Still, some of the comedy is clever; particularly the cooking show segments. While there are a few parts of Compulsion that don't work, it's entertaining and mysterious.

Compulsion is one of those films which could be anything! Success, failure or something in the middle - the result depending on the viewer, his understanding of the subtle directing and multilayered screenplay. Even with all that this movie is very easy to watch. The director Egidio Coccimiglio choose to remake the South Korean film 301/302 from 1995, and he did a good job, which is my opinion, following the solidly developed story by Floyd Byars and Cheol-su Park (the original version director). You can not miss the screaming color palette and food which will make you crave for what is on the screen... it was almost a study on domestic glamour and the decadence of exotic food preparation. The man responsible for the "eyes feast" is the legendary cinematographer Vilmos Zsigmond ("Close Encounters of the Third Kind," "Blow Out"), who knows how to impress using lighting and color, making a hypnotic movie to study, with rich hues and a welcome freshness. It was an interesting role for Heather Graham, and she showed that she could be a very interesting cooking show hostess. Other stars did their best as well: Carrie-Anne Moss, Joe Mantegna, Kevin Dillon, James McGowan and Kate Trotter, like true professionals, did whatever the director demanded, and at the end we got a smoothly moving drama/thriller which kept us guessing even after the end of the movie. This film interestingly explores the intimacy between the two through their connection with food, one as a passionate cook, the other as passionate consumer. But the things start changing when a next door mysterious neighbour shows up... Every character in this movie has her or his little world and we could say that various degrees of obsessive disorders are noticeable in these close worlds. Colourful cinematography brings that "happy note" which is extremely well mixed with the following dark tones. If you are someone who loves visually stunning looking movie with surprising attention to detail and you think that you can handle a movie which has more than one possible answer for the given situation, and you love puzzles which exist in someone's own world of fantasy and fixation - maybe it's time to see Compulsion!?