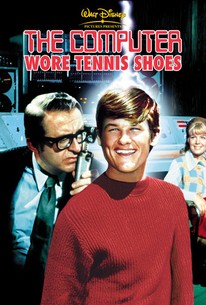 Dexter (Kurt Russell) is an under-achieving college student who is involved in an electrical accident with a computer. The mishap leaves him with the complete recall of the computer database. Professor Quigley (William Shallert) tests Dexter and proclaims him to be gifted, and Dean Higgins (Joe Flynn) is the skeptical scholar who is eventually convinced of Dexter's abilities. Gangster A.J. Arno (Cesar Romero) discovers Dexter has knowledge of his crime syndicate books and tries to silence the student. Dean Collingswood (Alan Hewitt) is the jealous rival who tries to steal Dexter for his own college in this amusing family comedy from Walt Disney studios. This film lead to a sequel and later a television program.

The Walt Disney Production family picture is as pedestrian as its title.

I saw this on TV when I was a kid and I really don't remember it, I'd like to see it again sometime, it has an interesting cast, but I remember it being pretty good.

Wow I have never thought about this movie until i just saw this now. Its very unimportant, but mildly entertaining.

There was no computer or tennis shoes.