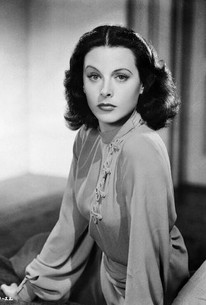 A half-hearted derivation of Ninotchka, Comrade X stars Clark Gable as an American news reporter stationed in Russia. Gable is actually the mysterious Comrade X, who has been smuggling provocative stories about the crumbling Soviet government out of the country. Threatened with exposure by a hotel porter (Felix Bressart), Gable agrees to help sneak the porter's beautiful daughter (Hedy Lamarr) out of Russia. The girl is a devout "old line" Communist, and thus is regarded as a potential counter-revolutionary by the paranoid Soviet leaders. Gable pretends to be a Communist himself to win Hedy's trust, inviting her to America to espouse her cause. He finds he can only secure her passport by marrying her, which leads to the anticipated complications. The Soviet higher-ups imprison Gable and Lamarr, sentencing them to death--but suddenly the counter-revolutionaries take charge of the government prison and arrest the arresters! The new man in charge (Sig Rumann) is Lamarr's political idol, but when he reveals himself to be vulnerable to blackmail and bribes, Lamarr becomes disillusioned by the Party Line and accompanies her new husband Gable to America. Filmed just before the "shifty" Communists were metamorphosed into brave freedom fighters by World War II-vintage filmmakers, Comrade X is of marginal historical value. Otherwise, it is an unfunny low point in the careers of Clark Gable and Hedy Lamarr.

A satire of extraordinary grace in which the Soviet regime is ridiculed. [Full review in Spanish]

Inspired by Garbo's Ninotchka (a much better film on any level) King Vidor's romantic melodrama is a serviceable star vehicle for Clark Gable as an American journalist and the beautiful Hedy Lamarr as a Soviet streetcar conductor.

There are no featured audience reviews yet. Click the link below to see what others say about Comrade X!