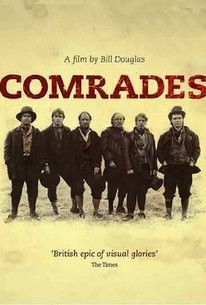 Set in the 1830s, this historical drama stars Robin Soans as George Loveless, a Methodist minister whose flock is a group of working families in Tolpuddle, a small town in the British Southwest. Most of the workers in the community are under the thumb of Frampton (Robert Stephens), a ruthless land owner, and his overseer Clerk (Murray Melvin); Frampton and Clerk demand long hours from their workers and pay meager wages. Convinced that the workers deserve a better shake, Loveless, encouraged by organizer Mr. Pitt (Michael Hordern), forms the Society of Friends, an early labor union, and organizes the men to negotiate with Frampton for better pay. When their salaries are instead cut, Loveless and his men go on strike, which could cripple Frampton financially. However, Frampton is well-connected, and soon both the government and private militias are sent in to break the strike and punish the rebellious laborers. The supporting cast includes James Fox, Freddie Jones, and Vanessa Redgrave. ~ Mark Deming, Rovi

Douglas wasn't afraid of going against the naturalist grain, placing himself closer in scope and sympathy to the cinema of continental Europe than to British social realism.

Three hours of battering with dogma.

There are no featured reviews for Comrades at this time.