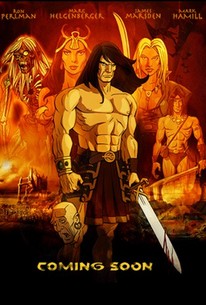 Red Nails depicts Conan's greatest ever adventure as he goes deeper into the Jeweled City, where he is reunited with Valeria the pirate. Within the regions of the city, they meet the Princess Tascela who shows a very high amount of interest towards Conan's female companion Valeria, however its more than her body which the Princess lusts... Full of betrayal and against the darkest of sorcery, Conan must use his instincts to save those who he cares about against the influence of the lands most twisted evil.

There are no critic reviews yet for Conan: Red Nails. Keep checking Rotten Tomatoes for updates!

There are no featured reviews for Conan: Red Nails at this time.