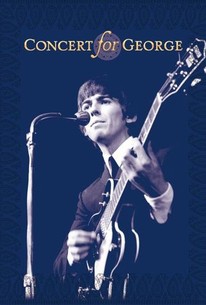 Both as a member of the Beatles and as a solo artist, George Harrison was one of the best loved and most influential musicians of his generation, and when he died November 29, 2001, after a long battle with cancer, it was a tremendous blow to the many great artists who were his friends and collaborators. A year to the day after his passing, a handful of pop music royalty who had known and worked with Harrison staged a special concert at London's Royal Albert Hall to play his music and honor his art and memory. Concert for George is a documentary which presents highlights from the Harrison memorial concert, featuring performances by Paul McCartney, Eric Clapton, Ringo Starr, Tom Petty and the Heartberakers, Jeff Lynne, Billy Preston, Jools Holland, Sam Brown, and Joe Brown. A portion of the profits from the film's release will be donated to The Material World Foundation, a charitable organization founded by Harrison.

Tom Petty and the Heartbreakers

Critic Reviews for Concert for George

There is so little posturing attitude at the Royal Albert Hall that you wonder if rock music really needs any of it-if the couture and surliness couldn't just go back where they belong, which is pro wrestling.

It offers a special 'something' for everyone who ever appreciated the Quiet Beatle's musical gifts and spiritual explorations.

It's a must-see for Beatle completists and an unexpected treat for casual fans.

Like the man himself, the entire thing is just too beautiful.

Unlikely to join the ranks of the great concert films, but it does provide both deep musical pleasures and a touching farewell to the former Beatle.

the performances of these great songs are truly heartfelt and emotional (I got chills more than a few times).

It's not only terrific music, but a terrific send-off.

Director David Leland crafts an evocative and entertaining concert film that captivates the heart and mind, regardless how familiar you are with the incredible repertoire of the "quiet Beatle."

Anyone who remembers Harrison fondly will enjoy this musical tribute, though it assumes a level of familiarity with Harrison's associates that not all viewers will have.

It's made with such unobtrusive expertise that it is truly the next best thing to having been there.

Audience Reviews for Concert for George

There are no featured audience reviews yet. Click the link below to see what others say about Concert for George!